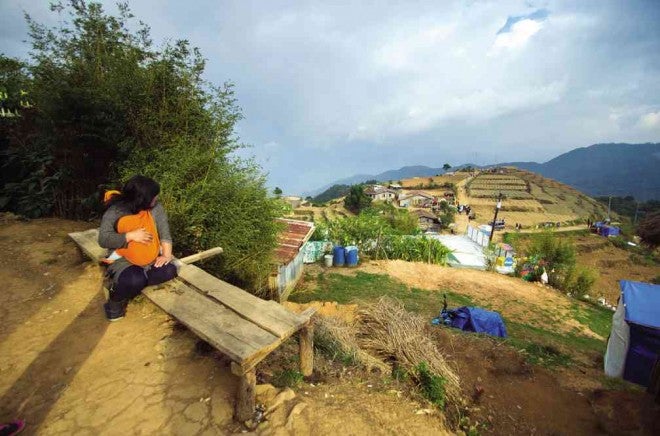 A WOMAN holds on to her newborn baby as she observes tourists who motored up to Sitio Pungayan atop the Santo Tomas watershed in Tuba, Benguet province. RICHARD BALONGLONG/INQUIRER NORTHERN LUZON

BAGUIO CITY—The mayor of Tuba town in Benguet province on Sunday said he would not have allowed a television network to hold a concert at a watershed area that it helped popularize through a soap opera.

Mayor Florencio Bentrez said ABS-CBN had not applied for a permit to stage a concert in Sitio Pungayan in Tuba’s Poblacion village, which had been marketed online as a thanksgiving event for the network’s prime-time soap “Forevermore” on May 10.

On Saturday, the ABS-CBN website announced that it had canceled the event due to environmental concerns. It did not elaborate.

Last week, a change.org petition urged Gina Lopez, chair of the ABS-CBN Lingkod Kapamilya Foundation, and Charo Santos-Concio, the network’s president, to move the concert elsewhere because of a citizen-led campaign to protect the Mt. Sto. Tomas watershed, which straddles Baguio City and Tuba town.

The petition was started by a group that staged a summit on Baguio’s overdevelopment at the University of the Philippines Baguio recently.

Asked if the concert organizers had applied for a permit, Bentrez, in a text message, said: “I have not received any request and I won’t grant it. It’s dangerous. Unsafe. It will draw too many people.”

Bentrez, along with several government officials, was the subject of a Writ of Kalikasan petition filed in September last year by Baguio and Benguet residents, including Church leaders.

The petitioners had asked the Supreme Court to protect a section of the Mt. Sto. Tomas watershed, due to an illegal road excavation carved through Mt. Kabuyao which affected their water sources.

The court issued a September 2014 temporary environmental protection order (Tepo) over the watershed, which the Department of Environment and Natural Resources has been citing when it recently ordered owners of at least 70 souvenir and food stalls to leave Pungayan.

The Tepo prohibits the Tuba government from allowing further development on the watershed.

The stalls sprouted as early as November last year to accommodate tourists, who have been visiting Pungayan, which served as the setting of the television show’s fictional community of “La Presa.”

The tourism boom ignited by the soap opera was initially welcomed by the Tuba community, but traffic gridlock on Marcos Highway and a growing garbage problem alarmed the villagers.

In April, ABS-CBN ran a series of stories about the impact of heavy tourism on the small farming community there.

Last week, Bentrez ordered the Tuba licensing office to stop issuing business permits to traders who wanted to set up businesses along the Mt. Sto. Tomas Road, which leads to Pungayan.

No proper documentation has been done to determine how many tourists has visited Pungayan since 2014, but the Tuba government began to impose an environmental fee this year for people who visit the area.

The ABS-CBN website acknowledges the fact that “the quiet village has become a tourist phenomenon of sorts, transforming local businesses and attracting unheard-of levels of traffic,” after “Forevermore” started airing in October 2014.

Addressing Lopez and Santos-Concio, the petitioners wrote: “Perhaps you are not aware that the area in question is within a critical watershed, one of the last forested areas in southern Benguet, which is an important source of potable water for residents and visitors of Baguio City, including downstream communities until Tubao and Rosario in La Union.”

The petition said the show’s popularity “continues to attract tourists by the hundreds to the area every weekend since late last year [and] the normal weekend crowd already impacts heavily on this fragile ecosystem, with the garbage left on the mountain and aggravated pollution of Amliang Creek; the trampling of young trees, natural biodiversity, and the crops of the local farmers; the traffic congestion; and the sudden influx of business interests.” Vincent Cabreza and Kimberlie Quitasol, Inquirer Northern Luzon