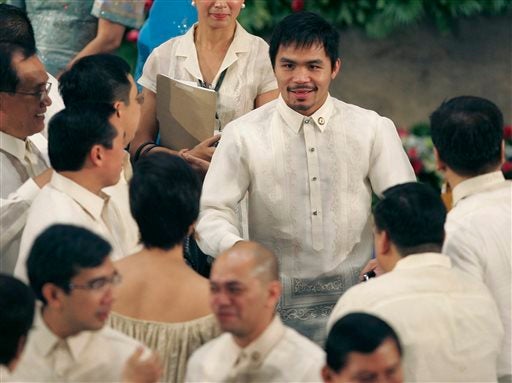 MANILA, Philippines — Manny Pacquiao has been an inspiration for millions of Filipinos not just as a boxer, but as a philanthropist. As a politician, not so much.

The country’s biggest individual taxpayer in 2013, Pacquiao has often shared his wealth with the poor in his home province of Sarangani, where he has been elected and re-elected to Congress on waves of adoration. Win or lose in his May 2 megafight with Floyd Mayweather, Pacquiao is a lock to keep his seat for a third and final term, unless he decides to run for another office such as senator.

But some are disappointed with Pacquiao’s political record. After nearly six years in office, he has yet to get a single bill through committee. Last year, he was present in Congress for just four days.

While Pacquiao was absent mostly to train, public administration professor Prospero de Vera said he was denying his constituents representation.

Pacquiao “has a problem understanding what representation means,” said de Vera, who has served as consultant to other legislators. “What is worrisome is that he doesn’t seem to be bothered by it.”

Pacquiao’s financial help is often sought and given in Sarangani, one of the Philippines’ poorer provinces, with a poverty rate of over 45 percent.

The high school dropout’s scholarships have helped hundreds of students who would never have gone to college without a financial sponsor, said Apolo Novicio, executive assistant to the Maasim mayor.

Pacquiao’s doling out of benefits, even from his own pocket, strikes some critics as too similar to how Filipino politicians typically operate, especially since he has few other political accomplishments.

“When you speak of the patronage system, it seems that he has strongly embraced it,” said political analyst Ramon Casiple, executive director of the Institute of Political and Electoral Reforms. He said Pacquiao keeps to the mold of the typical traditional politician, derisively called “trapo”, the Filipino word for rag.

Casiple said that lacking any political strategy or world view, Pacquiao could fall prey to “people around him who are not only ‘trapo’ but also opportunists, who will take advantage of his name and his money.”

Pacquiao has filed about a dozen bills as congressman but none has passed any of the committees they have been referred to, the first hurdle in the legislative mill. The bills include several pertaining to boxing and sports development and health, including one to build a provincial hospital.

Congressional records show that during his first term in 2010-2013, Pacquiao was “actually present” for 98 out of 168 session days, and only for four days last year. Congress is currently out of session, Pacquiao has been training for weeks and calls to his office rang unanswered.

Rep. Ben Evardone, a former provincial governor and member of the administration Liberal Party, defends Pacquiao’s absences in Congress, saying “being in Congress, making noise” is not as important as delivering public services.

“What is important is you bring home the bacon, as they say,” he said, referring to the number of school houses, irrigation canals and roads that people expect to be built in their district with their congressman’s help. “The fact that he is bringing glory to our country, he is able to unify, he is putting our country on the map, overshadows everything, his shortcomings.”

Pacquiao was praised for a 2010 speech supporting an anti-human trafficking law. But during a heated debate months later over the reproductive health bill that backs artificial contraception, he fumbled. He raised questions that had been asked and answered, and challenged provisions that had already been removed or amended in previous sessions when he was absent.

His missteps have not discouraged some from thinking he has what it takes to achieve higher office one day — perhaps even president. Political scientist Amado Mendoza views him as a “more authentic pro-poor” public servant than other prominent politicians.

“He would not be an eight-time champion if he wasn’t wise,” Mendoza said. “War is war, it just takes on different forms. Politics is war, boxing is war. It is easy to shift … from one form of warfare to another form of warfare.”

Roulette de Leon, a former city planning staff member and consultant on community development and management, said he supported Pacquiao’s first and unsuccessful foray into politics in the 2007 congressional election in General Santos city, where Pacquiao began his boxing career.

He has since become frustrated over his performance in the House of Representatives and suggested that Pacquiao hold off any immediate plans to run for a national office like senator next year or president in 2022, when 36-year-old boxing hero reaches the age required for the presidency.

Pacquiao should “first understand the job of a congressman before he understands the work of a senator, before he studies the responsibilities of a president,” de Leon said.

De Vera, the professor, said if Pacquiao intends to provide direct assistance to his constituents, he should run for a local government position such as mayor or governor because providing public service, though important, is not the main responsibility of a legislator.

Mayor Raul Martinez of Kiamba, who stood as wedding godfather for the Pacquiao couple, also thinks Pacquiao would be a good local executive. He has told the “fighting congressman” to make good on his commitment to develop Sarangani province and that the best way to do that is to serve as governor. But he suggests that should wait until he retires from boxing.

“‘You have to be a governor, full time,'” Martinez said he told Pacquiao. “‘You cannot serve two masters.’ He just laughed.”