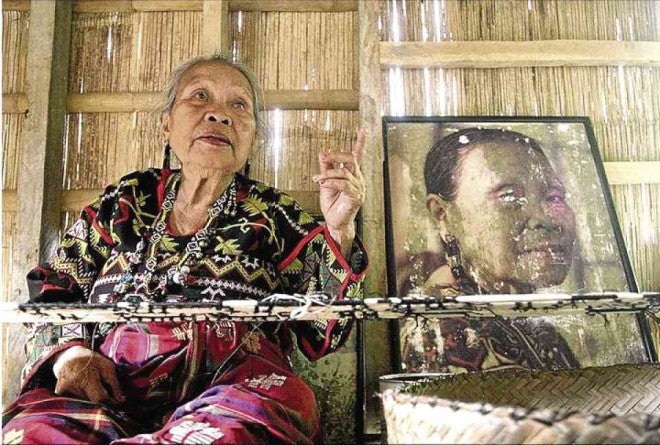 LANG DULAY in 2011 when she made known her sentiment against the commercialization of T’nalak, the now popular cloth being woven by the T’boli people and which she made famous. JEOFFREY MAITEM/INQUIRER MINDANAO

KORONADAL CITY—The country lost a national treasure after the acknowledged master of T’nalak weaving died on Thursday, about two months after she suffered a stroke, officials said.

Lang Dulay, 91 and a T’boli, died in her ancestral home in Lake Sebu, South Cotabato, according to Lake Sebu Mayor Antonio Fungan.

Dulay is a recipient of the National Living Treasures-Gawad ng Manlilikha ng Bayan Award given by the National Commission for Culture and the Arts (NCCA).

Known as “The Dreamweaver,” Dulay developed and mastered the weaving of the now famous T’nalak cloth of South Cotabato’s T’boli tribe, Fungan said.

“She died peacefully in her ancestral home,” Fungan said in a statement yesterday.

Two months ago, Dulay suffered a mild stroke and has not recovered since.

In 1998, then President Fidel Ramos bestowed on her the Gawad Manlilikha ng Bayan Award. According to an article by Maricris Jan Tobias in the NCCA website, Dulay shed tears of joy after learning of the award.

According to the article, Dulay had wanted to build a school for T’nalak weaving.

Dulay’s designs, said the article, are “special for the stories” they tell.

“Using red and black dyes, she spins her stories with grace. Her textiles reflect the wisdom and the visions of her people,” Tobias wrote.

Fungan said Dulay’s legacy would live on in South Cotabato as she had transferred her weaving expertise to her children, grandchildren, neighbors and other members of the T’boli tribe.

“The famous T’nalak weaving will continue as a tribute to Lang Dulay,” the mayor said.

Carlo Ebeo, NCCA vice chair of the committee on cultural education, said while Dulay’s death is a loss, her legacy “will be forever part of our heritage.”

The NCCA, said Ebeo, had given financial help to Dulay after she suffered a stroke and would finance the funeral expenses for her.

Details of the funeral, however, are not available yet.

Dulay earned the moniker The Dreamweaver because, according to T’boli elders, she first made the T’nalak cloth after she dreamed about it at age 12.

Dillera recommended the building of a tourism road that would lead to Dulay’s place and the weaving center that Dulay helped build.