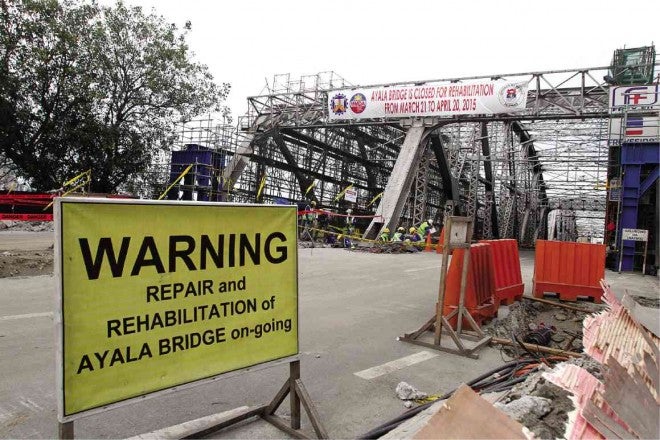 Motorists bound for Manila have no choice but to put up with heavy traffic on streets leading to the Ayala Bridge after the DPWH announced a delay in the completion of the structure’s ongoing rehabilitation. The bridge was last repaired in 1957. RICHARD A. REYES

Due to unforeseen circumstances in the ongoing rehabilitation work, Ayala Bridge in Manila will remain closed to vehicles until June 10, the Department of Public Works and Highways (DPWH) announced on Thursday.

“For public safety reasons and barring unforeseen circumstances, the DPWH has moved [the] full opening [to] June 11 due to the complexity of the rehabilitation activities on the bridge’s superstructure and retrofitting works on its substructure,” it said in a statement.

The department earlier said that the ongoing repairs would be finished by April 21. It later revised the schedule, announcing a partial reopening of the bridge starting May 13.

With yesterday’s announcement, the DPWH clarified that there would no longer any be partial reopening and the bridge would remain closed until its opening on June 11.

Public Works Secretary Rogelio Singson explained that part of the work for the full rehabilitation of the four-lane steel truss-type Ayala Bridge to restore its structural integrity was the strengthening of existing   abutments and pier foundations and the construction of a continuous slab design with an additional 4-inch slab on the bridge deck.

The 139-lineal meter bridge with a total superstructure width of 25 meters will also be lifted by 70 centimeters to protect it from being bumped by boats navigating the Pasig River.

In the past, Ayala Bridge was susceptible to damage from passing barges and tugboats because of limited freeboard clearance and also at serious risk from earthquakes. Its last major rehabilitation was done in 1957.

Ayala Bridge runs across the Pasig River to connect Manila’s Ermita and San Miguel districts. It was closed to motorists starting March 21 for the P447.9-million rehabilitation project with Frey-Fil Corp. and EEI Corp. as contractors. An estimated 35,000 vehicles use the bridge daily.