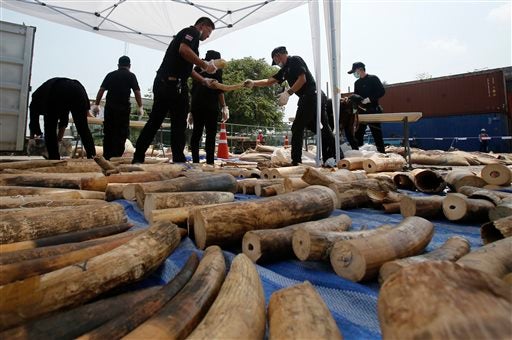 BANGKOK — Customs officials in Thailand say they’ve seized 3 tons of ivory worth $6 million hidden in tea leaf sacks in what they’re calling the second-biggest bust in the country’s history.

Customs Department Director-General Somchai Sujjapongse says the 511 elephant tusks were bound for Laos but seized at a port in Chonburi province in eastern Thailand.
He said Monday that the ivory was shipped out of Kenya last month and arrived at the Thai port on Saturday.

The bust came one week after customs officials seized 4 tons of tusks that were smuggled from Congo and also destined for Laos.

Thailand is one of the top destinations for African ivory smuggling in Asia and could face international sanctions if it doesn’t show progress in combatting the problem.