FORMER Bureau of Customs (BOC) chief John Phillip Sevilla has revealed the names of government officials who were behind his resignation.

In an interview with CNN Philippines recently, Sevilla said that the influential persons who wanted him out of the agency were: 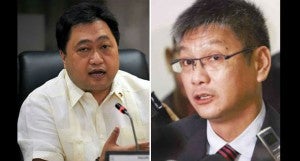 Sevilla said that the four officials were pressuring him to appoint Teddy Sandy S. Raval, chief of the BOC intellectual property rights division, to head the enforcement and security services (ESS) division of the agency.

The former Customs chief said that he rejected the move to appoint Raval to the post because he lacks qualifications or experience for the job. The ESS is a director position whose appointment rests in the hands of the President.

Sevilla described the ESS as a 400-man police force tasked to guard cargo shipments at ports.

In an earlier INQUIRER report, Sevilla said that since September or October last year, he has received feelers that the INC is pushing Raval’s appointment to the ESS.

In a radio interview, Senate President Franklin Drilon said that he supports a proposed Senate probe on Sevilla’s resignation.

On its part, opposition United Nationalist Alliance said that the Liberal Party has a hand in pressuring Sevilla to resign, saying that it is part of LP’s move to generate a P3-billion campaign kitty for the 2016 polls.

“[The] LP’s pressure on Sevilla was too strong to contribute P3 billion. He and others have felt the political atmosphere in the bureau. It looks like Commissioner Sevilla could not stomach what these pressure groups wanted him to do,” UNA interim president and Navotas City representative Toby Tiangco said on Friday. AC