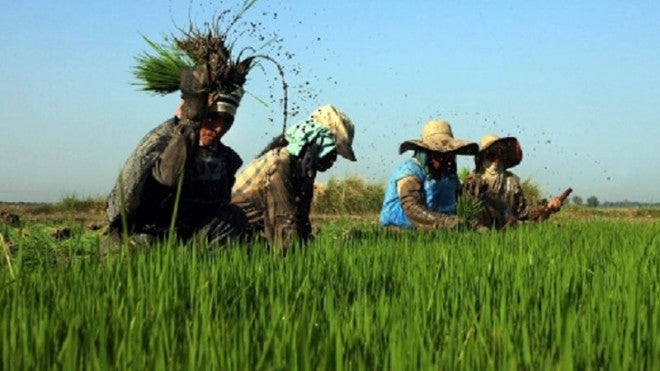 SCIENCE CITY OF MUÑOZ— Visit any rice farm in the country and chances are you will find middle-age or older men working the fields, either sowing rice seeds, harvesting grain or preparing land for the next planting cycle.

These farmers have been portrayed in news reports as poor and unschooled, but the results of surveys done by researchers of the Philippine Rice Research Institute (PhilRice) starting 1996 have shown otherwise.

The new Filipino farmer is educated and younger, age between 40 and 59.

Among them is Glen Mandac of San Mateo, Isabela province, who finished veterinary science and medicine at Central Luzon State University and passed the board examination for veterinarians.

Instead of seeking employment, Mandac went into rice farming. Today, at 47, he is tending his 3-hectare farm along with raising hogs and native chickens and managing his 50 rambutan trees.

His son is in a ladder-type course in agriculture and is planning to go into rice farming, too.

Jonathan Gamilla, 27, a resident of Sto. Domingo, Nueva Ecija province, went into rice farming after earning a degree in agriculture.

He worked on the land his father, Angelito, had given him. The property was acquired by the family through farming.

Like his father, Gamilla is producing rice and rice seeds.

“If not for rice farming, we could not have attained a comfortable life today,” he said.

This changing face of the Filipino farmer has been presented in the paper “An overview of the socioeconomic changes among Filipino rice farmers and their households,” released recently.

The results were compiled by researchers Ronnel Malasa, Marlon Velayo and Sergio Francisco of the Socio-Economic Division (SED) of PhilRice.

The surveys involved 2,000 farmers or their heirs and successors. The Bureau of Agricultural Statistics helped conduct the surveys.

Analysis of the results of the fourth survey, covering 2011-2012, has yet to be finished by the researchers.

“For the educated farmers, we surmised that they decided to engage in rice farming because they knew it is a profitable enterprise,” the researchers said. “They have a higher gross income compared with their counterparts with lower educational attainment.”

The average income advantage of farmers with college education is 40 percent, they said.

The researchers also said Filipino farmers are “graying” and they do not encourage their children to become their successors and take farm work.

Pampanga province has the highest mean age of farmers at 61.

The oldest farmer was found in Quezon province, who was 94, while two farmers in Nueva Ecija were 91.

But the researchers said this should not be a problem as far as farm labor is concerned.

A new force that provides labor in rice production has appeared, they said. It is composed mostly of young people hired by older farmers and other farm operators as “kasugpong,” or farmers paid on a percentage basis.

“The farmers or farm operators with permanent hired laborers increased from 4 percent to 13 percent,” the study said. “This new force enabled them to rent land in order to expand their rice farms.”

Reports said the kasugpong get 10 percent from the gross harvest as their share or payment. Their number is reportedly increasing.

Many respondents said remittances of their relatives working abroad had become a major source of capital.

Noticeable among many farm households are their other sources of income, which implied that they diversified their income-sources.

“The socioeconomic status of RBFH has dramatically improved considering that 60 percent of them are living above the poverty level in the 2006-2007 survey,” the researchers said.

One farmer, according to PhilRice data, feeds 37 Filipinos, up from 28 in 1980. By 2040, each farmer is targeted to feed 57 Filipinos, considering the country’s population growth.

Getting out of poverty

The increasing yield makes farmers stick to rice production and attract professionals to join them, the researchers said.

It helps that the Department of Agriculture is allocating a large chunk of its budget in the rice program, they said.

Farm mechanization is also easing the burden of farm work, which used to be dominated by the draft power of the carabao.

“Definitely, there are handsome benefits to rice farming,” the researchers said. “With some more yield increases and income diversification, it can give enough push to make farmers break away from poverty over time.”

Carabao population on decline; lawmakers want to know why