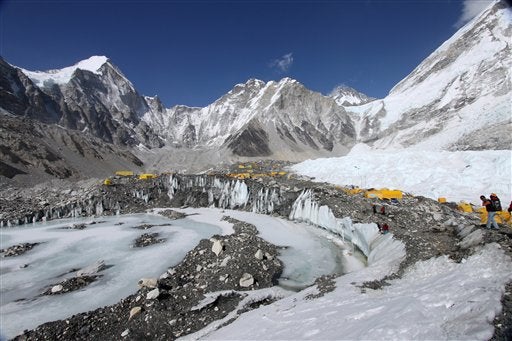 In this Saturday, April 11, 2015 file photo, tents are seen set up for climbers on the Khumbu Glacier, with Mount Khumbutse, center, and Khumbu Icefall, right, seen in background, at Everest Base Camp in Nepal. AP

KATHMANDU, Nepal — An avalanche triggered by a massive earthquake in Nepal swept across Mount Everest on Saturday, killing at least 10 climbers and guides, slamming into a section of the mountaineering base camp, and leaving an unknown number of people injured and missing, officials said.

The avalanche struck between the Khumbu Icefall, a notoriously treacherous area of collapsed ice and snow, and the base camp where most climbing expeditions prepare to make their summit attempts, said Ang Tshering of the Nepal Mountaineering Association.

The avalanche plowed into a part of base camp, a sprawling village of climbers, guides and porters, flattening at least 30 tents, Tshering said. With communication very limited at Everest, it was not immediately clear how many of those injured and killed were at base camp, and how many were elsewhere on the mountain.

An official with Nepal’s mountaineering department, Gyanendra Shrestha, said the bodies of 10 people had been recovered and an unknown number remained missing or injured. Their nationalities were unclear as climbers described chaotic attempts to treat the injured amid fears of more landslides and aftershocks that continue to rattle the region. Chinese media reported a Chinese climber and two Sherpa guides were among the dead.

Hundreds of climbers — ranging from some of the world’s most experienced mountaineers to relative novices on high-priced, well-guided trips — make summit attempts on Everest every year. At times, when the weather is agreeable, dozens of people can reach the summit in a single day. But high winds, brutal cold, difficult terrain and massive avalanches can hit the mountain with no notice. Hundreds of people have died on the mountain over the years. 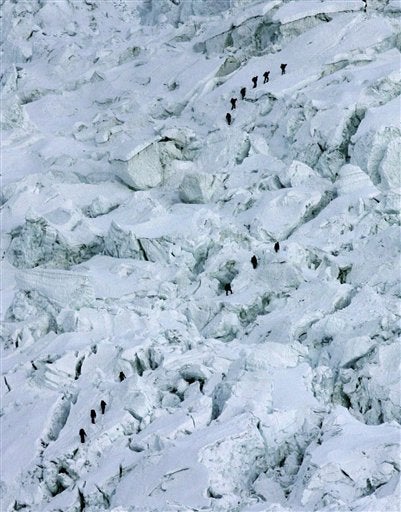 In this May 18, 2003 file photo, mountaineers pass through the treacherous Khumbu Icefall on their way to Mount Everest near Everest Base camp, Nepal. AP

“Right now, it is pretty chaotic and we try to help those injured,” Danish climber Carsten Lillelund Pedersen wrote in an email to Danish news agency Ritzau.

Norwegian climber Teodor Glomnes Johansen told a newspaper in Norway that people at base camp were working on saving lives.

“All those who are unharmed organize help with the rescue efforts. Men, women and Sherpas are working side by side. The job right now is to assist the doctors in the camp here,” Glomnes Johansen told Norway’s VG newspaper.

Carsten Lillelund Pedersen said that he and a Belgian companion were at the Khumbu Icefall, at an altitude of 5,000 meters (16,500 feet), when the earthquake hit.

He said a steady flow of people were fleeing the base camp for more secure areas down the mountain.

Local reports in China said an amateur team encountered an avalanche on the north slope of the mountains at an elevation of more than 7,000 meters (22,965 feet) and safely retreated to a lower camp.

The 2014 deaths occurred at the Icefall, where the edge of the slow-moving glacier is known to crack, cave and send huge chunks of ice tumbling without warning.

More than 4,000 climbers have scaled the 8,850-meter (29,035-foot) summit since 1953, when it was first conquered by New Zealand climber Edmund Hillary and Sherpa Tenzing Norgay. The numbers have skyrocketed in recent years, with more than 800 climbers during the 2013 spring season.

Following the 2014 disaster, guides accused Nepal’s government of not doing enough for them despite making millions in permit fees from Western mountaineers who attempt to scale the Himalayan peaks. The guides protested by refusing to work on the mountain, leading to the cancellation of last year’s climbing season.