The Sandiganbayan has denied the motions for reconsideration of city engineers and bar owners who were convicted for graft over the Ozone Disco Club inferno, the country’s worst fire incident that killed 162 persons two decades ago. 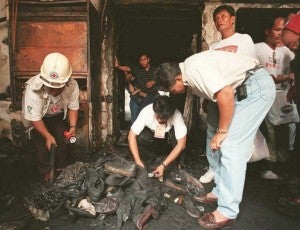 Investigators inspect a pile of shoes and other belongings near the doorway of Ozone Disco, where a stampede trapped and burned victims in a deadly fire. The blaze turned the disco hall in Quezon City into a burning inferno killing 162 people, mostly teenagers. AFP PHOTO

The court also denied the motions for reconsideration of Ramon Ng and Hermilo Ocampo, officials of the Westwood Entertainment Company which owned the ill-fated club.

“No reason was found to reverse the questioned decision finding all accused guilty of the crime charged,” the 18-page decision penned by Associate Justice Theresa Dolores Gomez-Estoesta read.

They were all convicted for violating Section 3 (e) of the antigraft law or for granting undue preference to Westwood. They were sentenced to a minimum of six years and one month to maximum of 10 years of imprisonment.

The court said the engineering officials granted building permits to Westwood without inspecting the dance club for structural deficiencies.

Dubbed the country’s “worst fire” incident in history, the Ozone Dance Club was gutted on March 19, 1996, supposedly due to electrical deficiencies. At least 162 persons in the club were killed while 93 were injured.

“Dubbed as the worst fire in Philippine history, which claimed many young lives and several others, the ash and soot of what remained of the structure once known as the Ozone Dance Club led to questions and subsequent investigations of its structural integrity and fire safety measures,” the court’s ruling for conviction read.

The court in its conviction said the officials conspired with each other to ignore the rules under the National Building Code.

For one, the building has a swing-in entrance door, a violation of the building code, the court said. The entrance door also served as the exit door, which jammed as hundreds of people tried to escape. The persons trapped behind the jammed door burned to death.

The exit door at the VIP lounge was also obstructed by a sofa and an LPG tank, the court said. The exit door also only led to a fire wall.

“Notably, the pile of dead bodies found at the point of entrance/exit of the main dance floor remains a standing testament to the violation [by] Ozone Disco Club [of] the safety requirements on the provision of an exit door,” the court said in its conviction. RC