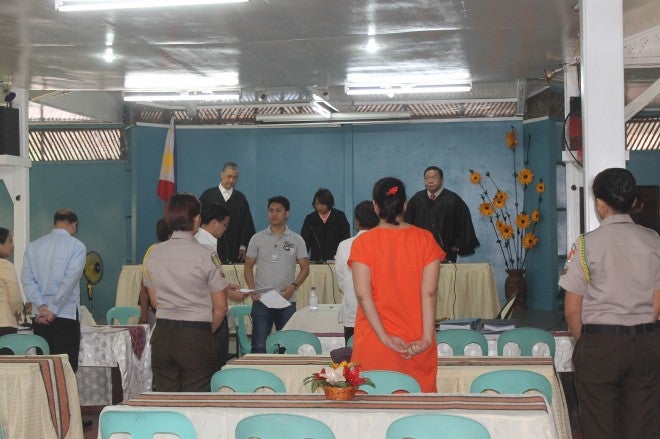 Napoles attends her bail hearing from plunder over the pork barrel scam in her orange prisoners gown at the Mandaluyong correctional, where she serves life sentence. She was convicted to life in prison for illegally detaining Benhur Luy. She faces plunder, a non bailable offense, for allegedly masterminding the pork barrel scam. Photos from the Correctional Institution for Women.

Accused pork barrel scam mastermind Janet Lim-Napoles on Friday took a swipe at the Makati judge who sentenced her to life imprisonment, saying the judge was given a promotion in exchange for her conviction.

Attending the bail hearing of her plunder case for the first time at the Correctional Institution for Women in Mandaluyong City, where she is serving her life sentence, Napoles released a statement criticizing Makati Regional Trial Court Branch 150 Judge Elmo Alameda of convicting her in exchange of a promotion.

The controversial figure behind the alleged Priority Development Assistance Fund (PDAF) scam attended for the first time her bail hearing inside the “Bulwagan Consolacion,” a makeshift courtroom within the correctional complex.

She wore her orange prisoners’ gown prescribed to inmates under maximum security. 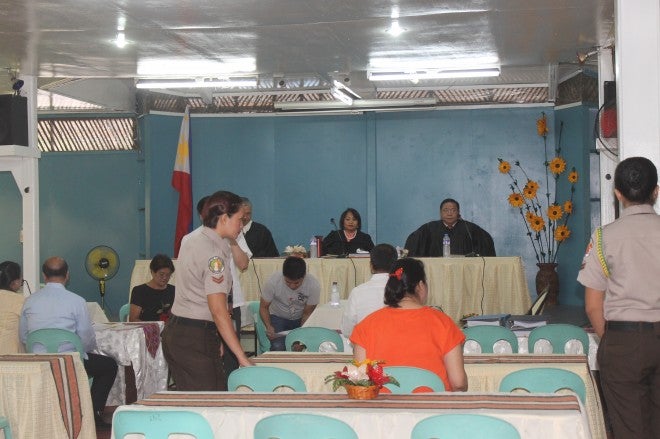 She said Alameda was given a promotion to an appellate justice following her conviction. She claimed officials of the Department of Justice had been visiting Alameda about his promotion.

“Abangan niyo ang pagkapromote (Watch out for his promotion),” Napoles said of Alameda.

Alameda found Napoles guilty of illegally detaining Benhur Luy for three months due to his supposed knowledge of the PDAF scam. Luy is Napoles’ entrusted finance officer who took records of lawmakers’ alleged kickbacks. He has turned state witness.

Napoles said she found it ridiculous that her conviction for illegal detention was penalized with life imprisonment, while her fellow convicts for homicide or murder were sentenced to at least 12 years.

“Namiss ko kayo (I missed you),” she told reporters while smiling.

The courtroom was a bare concrete bungalow with a wooden ceiling. The black robed Associate Justices of the Sandiganbayan Third Division sat behind a bare long wooden table covered in cloth, a stark contrast to the polished elevated table in the antigraft courtroom.

Napoles sat on a monobloc chair before the justices, surrounded by her jail wardens. But this did not stop her from playing around with reporters before the hearing.

She badgered reporters why they kept on covering her bail hearings.

In clarifying, she added: “Sa kababantay niyo sa akin, baka ang Pilipinas makuha na ng mga kamag-anak ko (Because of your following my case, the Philippine might be taken over by my relatives).”

Napoles has Chinese blood from her mother Magdalena Lim.

The court conducted Friday’s hearing at the correctional pending the Supreme Court’s decision on the request to allow Napoles to leave jail for her bail hearings at the Sandiganbayan.

Napoles, the accused architect of the scheme of pillaging lawmakers’ PDAF to ghost projects for kickbacks, has applied for bail before the antigraft court for plunder, a non-bailable offense.

The pork barrel scam case has resulted in the detention of Napoles, Senators Ramon Revilla Jr., Jinggoy Estrada, and Juan Ponce Enrile, and former representatives Edgar Valdez and Rizalina Seachon Lanete, and their aides for allegedly conniving with each other to earn kickbacks.

Napoles was convicted to serve life sentence on the serious illegal detention case filed by Luy, her former entrusted finance officer who blew the lid off the alleged scam.

In August 2013, Luy accused Napoles, a cousin, and her brother of illegally detaining him at Bahay ni San Jose and at the South Garden Pacific Towers in Taguig City, a Catholic retreat house in Magallanes Village, Makati City, after they reportedly found out that Luy was having separate business transactions allegedly involving lawmakers’ PDAF. DPL