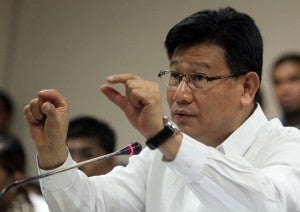 MANILA, Philippines–The P7.2-billion National Greening Program (NGP) and the land survey project of the Department of Environment and Natural Resources (DENR) were “unsuccessful,” according to the Commission on Audit (COA).

In its 2013 DENR audit report, the COA said the agency undertook the tree-planting program and the cadastral survey project covering 10 regions of the country without an efficient and effective system of implementing and monitoring projects.

The COA said the DENR identified “nonplantable areas” as tree-planting sites because it did not conduct mapping and planning.

It said the delay in the delivery of seedlings resulted in the “untimely planting,” which happened at the end of the rainy season, “thus giving the planted seedlings a very short period to recover and withstand the onset of the dry season.”

In some planting sites, the COA said the DENR had no partner organization to help monitor the plantations.

The COA report on the DENR’s finances is part of the latest incriminating financial audit of major state agencies that receive the biggest appropriation from the national government and are headed by President Aquino’s close political allies.

In its scrutiny of the agency’s projects, the COA said the DENR did not put up measures to ensure the viability of the NGP, the centerpiece of the Aquino administration’s efforts to achieve food sustainability and save the environment from further degradation.

“In the overall analysis, the unsuccessful DENR program/project delayed the benefits that could have been derived from the completion of the NGP and the cadastral survey project as envisioned by the program/projects,” the COA said.

Environment Secretary Ramon Paje did not respond to the Inquirer’s request for comment on Thursday.

The NGP aimed at planting 1.5 billion trees on 1.5 million hectares of public land within a four-year period with help from local governments and other partner agencies.

The government appropriated P5.9 billion for the tree-planting program, which was also designed to help reduce poverty in the countryside and to mitigate the effects of climate change.

The land surveys, on the other hand, had a budget of P1.3 billion also for the same number of years.

Upon verification, the COA found various deficiencies in the two projects that contributed to the DENR’s failure to satisfy their goals.

“The objectives of the NGP and [the cadastral surveys] of the DENR regional offices were not fully attained…due to lack of an efficient/effective implementation and monitoring mechanisms for the program/projects,” the COA said.

It said the deficiencies led to low accomplishments and survival rates of tree saplings, noncompliance with the work and financial plan, delay in the delivery of seedlings and failure to finish the projects.

The COA said these “[delayed] the benefits that could have been derived from the completion of the NGP and the cadastral surveys contrary to NGP implementation manual, applicable DENR circulars … and other regulations.”

The state auditors also noted the lack of a “clear-cut policy” in the custody of seized forest products, tools and equipment, which led to “undetermined losses to the government due to unaccounted assets and exposure of the same to risks while awaiting final disposition.”

The COA likewise assailed the DENR for spending P31.6 million in the purchase of goods and services through deficient public biddings, which violated the provisions of Republic Act No. 9184, also known as the Government Procurement Reform Act.

It said this “[defeated] the purpose of transparency, competitiveness and accountability in the procurement process.”

According to the COA, the NGP has four major components—survey, mapping and planning, plantation establishment, seedling production/procurement, and protection and maintenance of established plantations.

In the Ilocos region, only 53 percent of the 14,954 hectares had been covered by the project.

In the Calabarzon region, environment officials failed to coordinate with the local offices of the Department of Public Works and Highways (DPWH) in the proper identification of plantation areas.

Because of this, seedlings were planted in areas of Cavite province that were later cleared by the DPWH for road-widening projects.

“This, therefore, resulted in wasted, damaged and increased mortalities of seedlings or trees planted in most municipalities in the province of Cavite,” the COA said.—With a report from Dona Z. Pazzibugan