Is Big Brother blind at the airport? 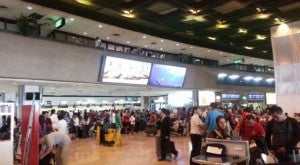 MANILA, Philippines–Big Brother is not all-seeing after all at Ninoy Aquino International Airport (Naia), where security personnel have to contend with many blind spots and the 20-year-old surveillance cameras that remain in service are few and far between.

This was explained to the media on Thursday by the Manila International Airport Authority (MIAA), which came under fire after six baggage handlers were caught last month keeping items allegedly stolen from passengers’ bags at Naia.

On Wednesday, the MIAA also received a complaint from a woman who found her checked-in bag “slashed open” when it came out on the arrival baggage conveyor at Naia-Terminal 3 and no longer containing the golden necklace and some brand-new clothes she had put there.

The six workers cited in last month’s alleged theft were actually employees of an airline company, but the incident prompted MIAA officials to clarify where its responsibility over luggage security ends and where the airlines’ obligations begin.

“MIAA does not handle all security at the airport. Our concern on passengers’ belongings stops when the baggage is loaded onto the aircraft and starts after it leaves the conveyor belt at the arrival area,” said Supt. Adrian Tecson of the Naia-Terminal 1 airport police.

He said there is a section in the terminal—the “baggage buildup breakdown area”—which is jointly manned by airline employees and airport baggage-handling and security personnel who are tasked to sort and screen checked-in bags of both arriving and departing passengers.

Airport workers assigned to that area wear outfits that have “no pockets” and are frisked by security guards whenever they enter or leave, Tecson added. They are also not allowed to wear jewelry or bring cell phones and other gadgets while inside.

The area is also monitored through 10 closed-circuit television cameras (CCTVs) which were installed in the 1990s.

Tecson said Naia’s personnel responsibility over the bags ends when they leave this area.

In an Inquirer interview, the official conceded that pilferage may happen once a bag goes to the plane from the breakdown area, and vice versa.

According to David de Castro, spokesman for MIAA general manager Jose Angel Honrado, the 10 CCTVs have proven to be sufficient to cover the breakdown area, but Miaa is looking for bidders who can expand the camera network in all four Naia terminals.

The plan, which was announced last year, is to install a total of 707 cameras at a cost of P428 million, he said.

The first bidding, however, was declared a failure and those who participated in the second bidding held in February are still being assessed, De Castro added.

“If the second bidding also fails, MIAA will enter into a negotiation with interested bidders. It will be a bidding through negotiated procurement. The negotiation will have to be with at least three bidders,” he said.

The Inquirer learned from Naia insiders the existing security cameras at Terminal 1 rely on lenses that are already “blurred” and have very poor resolution.

“I’m not sure if all of them still work but I know that most of them are already busted because they are so old,” said one worker. “These cameras are practically begging to be replaced.”