New airstrikes in Yemen after Saudis say operation over 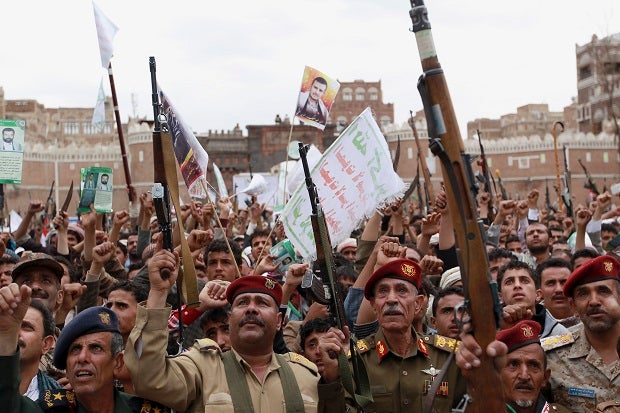 Shiite rebels, known as Houthis, hold up their weapons to protest against Saudi-led airstrikes, during a rally in Sanaa, Yemen, Thursday, March 26, 2015. Saudi Arabia bombed key military installations in Yemen on Thursday, leading a regional coalition in a campaign against Shiite rebels who have taken over much of the country and drove out the president. AP

SANAA, Yemen — Hours after Saudi Arabia declared an end to its coalition’s nearly monthlong air campaign in Yemen, new airstrikes Wednesday hit Iran-backed militants and their allies in two cities, and the rebels said they would welcome U.N.-led peace talks in the conflict that has killed more than 900 people.

The continued airstrikes suggested that the U.S.-backed offensive, aimed at restoring Yemen’s internationally recognized president, was entering a new phase in which the Saudi-led military action will be scaled back but not halted completely.

Air raids struck positions held by the rebels, known as Houthis, and their allies in the southern port of Aden and the central city of Taiz, Yemeni officials said. Fighting continued in both areas between the rebels and supporters of exiled President Abed Rabbo Mansour Hadi, a close U.S. ally who fled Yemen on March 25.

The capital of Sanaa was calm, however, giving residents their most peaceful night in almost four weeks. In the evening, thousands of pro-Houthi demonstrators marched and vowed they would never submit to what they described as “Saudi-American aggression.”

The Shiite rebels are backed by former President Ali Abdullah Saleh, an autocrat who ruled the impoverished but strategic country for three decades until he was removed amid a 2011 Arab Spring uprising. His military forces have aided the rebels who advanced from the north and control much of Yemen, including Sanaa.

Saudi Arabia and a coalition of its Gulf allies began the air campaign March 26, aimed at crushing the Houthis and allied military units loyal to Saleh. The Saudis believe the rebels are tools for Iran to take control of Yemen. Iran has provided political and humanitarian support to the Houthis, but both Tehran and the rebels deny it has armed them.