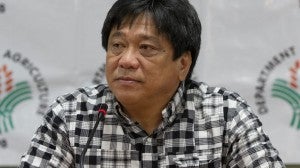 MANILA, Philippines–Bayan Muna Rep. Neri Colmenares said it was time for President Aquino to sack Agriculture Secretary Proceso Alcala after the Commission on Audit (COA) uncovered yet another anomaly under his watch.

“President Aquino should kick out Secretary Alcala from the DA (Department of Agriculture) and he should be prosecuted for what he has done in his department,” said Colmenares in a statement.

Based on a COA report released on Tuesday, the Inquirer reported on Wednesday that the DA squandered more than P14.4 billion in 2013 in questionable projects that it implemented despite violations of laws and regulations.

Colmenares said this was just the latest in a string of Alcala’s transgressions, as he noted that graft and corruption cases involving rice importation and garlic price hike have been filed.

Colmenares said the President should take part of the blame for keeping Alcala despite his abuses.

“President Aquino should also be held to account because Alcala was allowed to wreak havoc on the agriculture sector. Losing P14 billion in highways and bridges that led to nowhere is unacceptable, especially when the government claims to have no funds for health, education and other social services,” said Colmenares.–Gil C. Cabacungan