DOJ report: Attackers shot SAF men even with hands up in surrender 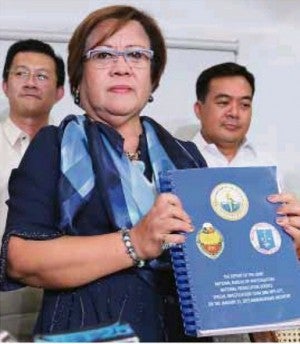 MANILA, Philippines–“It was murder all the way and around.”

That’s how the Department of Justice (DOJ) investigative team described the deaths of 35 police commandos in a clash with Moro rebels in Mamasapano, Maguindanao province, on Jan. 25.

“[T]he complicated truth is somewhat in between these two extremes,” the DOJ report said.

The report charged that the attackers continued to shoot the policemen even when the wounded survivors had their hands raised in surrender.

The report also mentioned that the star witness identified as “Marathon” had a video stored in his mobile phone that depicts scenes from the Mamasapano incident.

The team recommended murder charges against 90 of the rebels even though the move could jeopardize a peace process championed by President Aquino.

The team, composed of state prosecutors and National Bureau of Investigation agents, recommended charges of complex crime of direct assault with murder and theft of government property against the Moro rebels and members of private armed groups involved in the clash.

The investigation covered only the fighting in Tukanalipao village in Mamasapano where the 35 Philippine National Police Special Action Force (SAF) commandos were killed.

The commandos belonged to the 55th SAC. Only one member of the company survived.

Nine other SAF commandos, from the 84th SAC, were killed in Pidsandawan village, also in Mamasapano, but the investigative team has yet to look into what really happened there during the SAF operation to arrest three terrorists.

Abu Misri Mama, spokesman for the BIFF, said the government was only wasting its time in filing charges, because the BIFF fighters would never face the government’s justice system.

“They always file charges against us but they actually have not arrested anyone,” Mama said.

The names of the 90 suspects as well as the identity and the circumstances surrounding the team’s star witness, identified only as Marathon, were obscured in the report.

Assistant State Prosecutor Juan Pedro Navera said the names of the suspects were “redacted” pending the filing of charges.

De Lima said the redaction was necessary as the suspects were “considered still at large,” although she added that the names would be disclosed upon the filing of the charges.

She said only she and President Aquino had the unredacted or complete version of the report.

“To prematurely identify these suspects before the charges against them are filed, gives these suspects [who are at large] all the more reason to evade the law and will make it difficult for law enforcers to arrest them, perhaps requiring another Oplan Exodus-type of operation for their capture,” the report said.

Marwan, who had a $6-million bounty on his head offered by the United States, was killed during the operation. Usman, for whose capture the United States is offering $3 million, and Baco escaped.

The identities of Marathon, who has been admitted into the Witness Protection Program, and 10 other witnesses were also temporarily withheld for security reasons, De Lima said.

Marathon gave three sworn statements and identified the suspects, including the ones who took the dead policemen’s weapons and belongings, she said.

In his statement, Marathon said he later moved to the cornfield, where he heard people telling the Moro fighters that the men trapped there were policemen.

He said he saw five wounded SAF commandos emerge with their hands raised in surrender, but were shot.

The Moro fighters later went to the area to pillage the dead, he said. The rebels also kicked some of the corpses into the river, he said.

The investigative team ruled out the filing of charges for violation of international humanitarian laws (IHL), as provided under Republic Act No. 9851, against the killers of the SAF commandos.

De Lima, in a statement, said the factual findings in the report were “as credible as any finding of fact that has been arrived at either in the PNP board of inquiry [report] or in the Senate report.”–With reports from Nancy C. Carvajal in Manila; Karlos Manlupig, Inquirer Mindanao; and AFP