An island of organically grown cattle 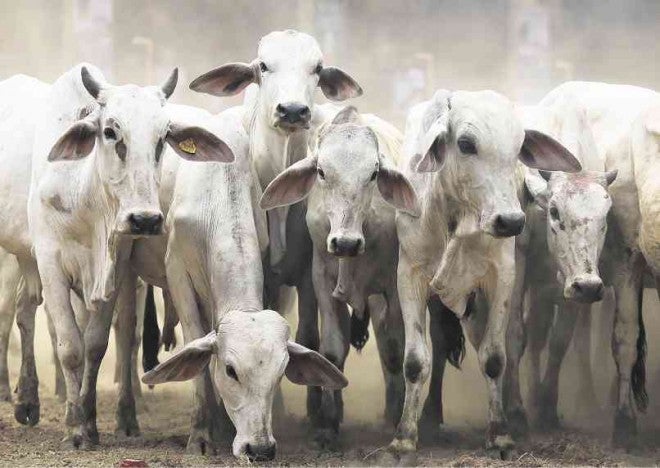 ORGANIC CATTLE Some of the more than 40,000 heads of cattle grazing in at least 40 percent of Masbate’s land area. The province has about 130 ranchers. MARK ALVIC ESPLANA/INQUIRER SOUTHERN LUZON

MASBATE CITY—Organic cattle that pasture on rolling hills and meadows eat up large swathes of land in the island-province of Masbate.

Mark Espinosa, 42, a ranch administrator, said the cattle grazing on hundreds of hectares of pasture land were being fed purely on grass. Ranchers like him own at least 500 hectares of land for their livestock project to become viable.

The ranches, which can be as big as 2,000 ha or even more, are exempted from the agrarian reform program because these are devoted to livestock production, Espinosa said.

Ideally, the ratio of raising cattle is one head for every 1.5 ha so that a 500-ha ranch with enough grazing area can sustain as many as 400.

A 500-ha ranch must be divided into several grazing areas, which are apportioned to several herds “on rotation” to ensure that the available grass can easily recover and be utilized well, Espinosa said.

There are around 130 ranches in the province, according to Manuel Sese, president of Masbateño Rodeo Inc., an organization of ranchers and individuals. The cattle raisers and ranchers are based in the towns of Milagros, Balud, Mandaon, Uson, Dimasalang, Palanas, Cawayan, Cataingan, Placer and Esperanza, Masbate City and on the islands of Burias and Ticao.

Department of Trade and Industry records showed that 40 percent of the land area of the province is devoted to cattle ranching, said Edgar Ramos, its provincial director. The total land area of Masbate is 4,152 square kilometers while its population as of 2010 was 834,650.

Historical records suggest that cattle ranching has been practiced in Cataingan, Masbate, since the Spanish period. (website link: abante-cataingan.tripod.com/about.htm)

During the 1880s, when the municipality of Cataingan was still a barrio of Palanas town, a certain Spaniard from Manila named Don Jose Muños owned herds of cattle that were pastured in Cataingan.

The herds of cattle under an administrator named Don Fernando Orizando freely roamed in what is now the center of Cataingan town and scattered their manure all over the place. Because of the wastes, the place was named “Kataijan” to mean “where there’s manure.”

To remove the derogatory connotation of Kataijan, the town was finally named Cataingan on July 7, 1885, when it was detached from Palanas town and made a separate pueblo by the Spanish government.

Masbate is the biggest cattle-raising province in Bicol region, the National Statistical Coordination Board (NSCB) said. Its main agricultural products include copra, rice, corn and tobacco while fishing is a major industry.

The province, which is also rich in gold, has the biggest mining operation in Bicol. Other minerals found are manganese and limestone. Ironically, the poverty incidence in the province is the highest in the region.

Four out of 10 families were living in poverty, or 40 percent of its population, as of 2012, the NSCB said.

According to the Bureau of Animal Industry, Masbate is the only Bicol province commercially producing cattle. It is credited with producing the biggest number of heads of cattle all over the country as of January 2014.