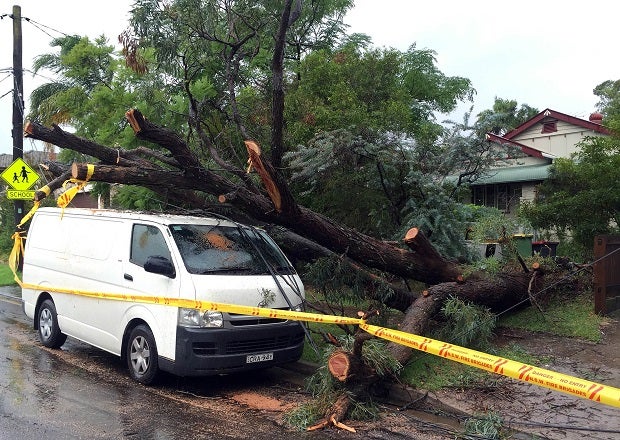 An uprooted tree fall on a parked car in the residential area of the western Sydney following an over night strong storm on April 21, 2015. Australia’s biggest city Sydney and surrounding areas were lashed by wild weather with trees felled, thousands of homes without power, schools shut and huge sea swells that hampered cruise ship movements. AFP

The area was suffering its second day of gale force winds and torrential rain, with the Bureau of Meteorology reporting 119 millimeters (five inches) falling in Sydney in 24 hours.

“Extremely busy is an understatement,” he told the Australian Broadcasting Corporation.

“We’ve haven’t seen this sort of weather pattern, this east coast low or one as severe as this in years. The consistent gale force winds… are actually cyclonic in some areas with gusts up to 135 kilometres (84 miles) per hour.”

No deaths have been reported although the broadcaster said one person was missing near Newcastle, 150 kilometres north of Sydney, after floodwaters swept through a campground, washing away campervans and caravans.

In Sydney, flights were delayed and a cruise ship attempting to enter the harbour was unable to do so.

The Sydney Harbour pilot could not board the Carnival Spirit due to massive swells, with the vessel stuck in the open ocean with hundreds of passengers on board.

The Port Authority of NSW said the harbour had been closed for commercial shipping, possibly for 48 hours. Ferries across Sydney were cancelled or had limited services.

More than 40 schools were closed while AusGrid said more than 180,000 homes and businesses were without power across Sydney and the Central Coast area to the city’s north.