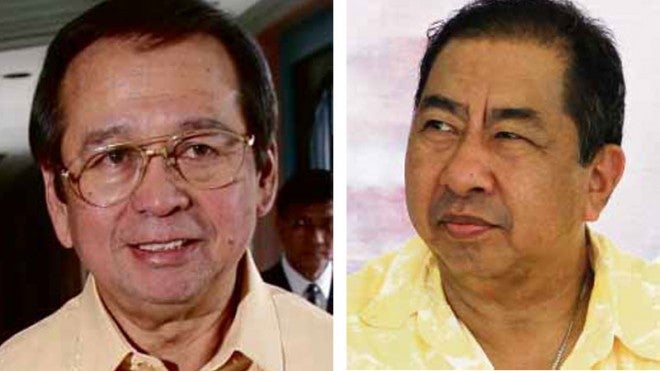 MANILA, Philippines–Public funds are for public use only.

Incumbent Oriental Mindoro Gov. Alfonso Umali Jr., the treasurer of President Aquino’s Liberal Party, learned this the hard way after he was sentenced to up to 10 years in prison on Monday by the Sandiganbayan for illegally facilitating a P2.5-million loan to a ship owner in 1994.

Also found guilty for violation of Republic Act No. 3019, or the Anti-Graft and Corrupt Practices Act, were former Oriental Mindoro Rep. Rodolfo G. Valencia and former Board Member Romualdo Bawasanta.

Valencia and Umali were then the governor and provincial administrator, respectively, when the provincial government approved the irregular loan to Alfredo Atienza for the “repair, operation and maintenance” of his passenger vessel, the MV Ace, in January 1994.

A veteran politician in the island province, Valencia is said to be eyeing his previous post in next year’s elections as Umali is serving his third and final term as governor.

Umali, one of Aquino’s staunchest political allies, is the latest among the President’s friends and supporters to be implicated in scandals involving corruption.

Accompanied by their lawyers, Umali, Valencia and Bawasanta showed up at the promulgation of their case at the antigraft court’s Fourth Division.

In a 37-page ruling, the court said the accused acted in bad faith when they gave “unwarranted benefit” to Atienza by providing him public funds for his private business despite warnings from provincial treasurer Manuel Leycano and provincial auditor Salvacion Dalisay.

In addition to the prison term, the court ordered the cancellation of all their retirement and gratuity benefits and ordered them to refund the P2.5-million loan to the provincial government.

The three were also perpetually barred by the court from joining the government service.

Umali and Valencia said they would file a motion for reconsideration.

In a text message to the Inquirer, Valencia said the Sandiganbayan decision was “not yet final.”

Umali, in a telephone interview, said that as provincial administrator at the time, his job was “only ministerial.” He said he did not have discretion in granting loans and he was only acting on instructions from the governor.

“In this case, the court finds that the accused acted with manifest partiality and evident bad faith…. (They) entered into a contract that is grossly and manifestly disadvantageous to the government,” said the resolution written by Associate Justice Jose Hernandez, chair of the Fourth Division.

“This court cannot condone acts or omissions that greatly diminish the standard of public accountability. Otherwise, it will be tantamount to laying the groundwork fertile for graft and corruption,” it said.

The court said the acts of the public officials “undoubtedly … resulted in manifest favor of Atienza and against the finances of the provincial government.”

“That public funds should not be used or applied for a private purpose is a fundamental rule in fiscal administration. This limitation was violated by the accused when they granted the loan for the repair, maintenance and operation of Atienza’s vessel,” the court said.

In a statement, Valencia expressed regret over the court’s decision as he reiterated that they approved the loan to Atienza after Oriental Mindoro province was struck by “four successive killer typhoons” in 1993.

He also blamed his political rivals for using the issue to “malign us and charge us in court.”

“However, despite our good intentions and the merit of what we did, our political enemies still used it to malign us and charge us in court. Sadly, after 21 years of litigation, the Sandiganbayan Fourth Division found us guilty for what we did to help our constituents in Mindoro,” he lamented.

The court convicted the three on Sept. 9, 2008, after throwing out the demurrer to evidence filed by their lawyers.

It, however, proceeded to hear the merits of the case on appeal.

Court records showed that the provincial council passed Resolution No. 284-93 on Dec. 22, 1993, allowing Valencia to enter into a credit agreement with Atienza ostensibly to help him operate his passenger vessel.

The court, however, questioned the inconsistencies in the reasons given by the accused in justifying the loan they extended to Atienza.

In its resolution, the provincial council said it was “imperative to encourage competition in the shipping industry serving our constituents not only to afford the commuting public a choice, but also to improve the quality of the ferry transport service that the people of Oriental Mindoro rightly deserves.”

The resolution did not include the effects of the typhoons that had swept through the province and caused damages as reason for its passage as claimed by Valencia.

On the same day, the provincial government signed a loan agreement with Land Bank of the Philippines regarding the release of public funds to Atienza.

This time, the reason for the release of the loan was “to subsidize the purchase of one ferry boat.”

As stipulated in the agreement, the provincial government promised to settle the loan with Landbank within 18 months with an annual interest of 16.5 percent.

Atienza, for his part, issued several postdated checks to the provincial government as payment for the loan. The checks, however, bounced for lack of funds.

In separate letters to Valencia, Leycano and Dalisay reminded the then governor that the loan contract was illegal because it did not have the preaudit requirement of the Commission on Audit.

Leycano also told Valencia that Atienza was a “private individual and should not be given the privilege of using people’s money in furtherance of his transport business.”

In its decision, the court also noted that Atienza had failed to produce documents pertaining to the existence of the MV Ace and his ownership of the vessel.

“Even if benefit to the riding public in terms of improvement in sea transport service was envisioned as a possible consequence of the transaction, it remains that the direct object of the transaction was to finance and promote the private business of Atienza,” the court ruled.

“For all intents, the credit agreement is grossly and manifestly disadvantageous to the finances of the provincial government. It’s in violation of the law as it was undertaken for a private purpose. It burdened the provincial government with financial obligations and it had no security or guarantee from Atienza for its payment,” it said.–With a report from Madonna T. Virola, Inquirer Southern Luzon