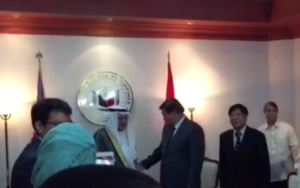 The secretary general of the Organization of Islamic Cooperation (OIC) went to the Senate on Monday to express support for the peace process between the government and the Moro Islamic Liberation Front and to press for the passage of the proposed Bangsamoro Basic Law (BBL).

“We are here in the Philippines to underline the support of the OIC to the current peace process, CAB (Comprehensive Agreement on the Bangsamoro) and BBL,” said Iyad Ameen Madani in a press conference after meeting with Senate President Franklin Drilon and Senator Ferdinand Marcos Jr.

BACKSTORY: OIC chief due in Manila
The head of the OIC added that he wished “to underline our optimism that this agreement will be ratified and accepted by the people of the Philippines.”

‘Protect interests of the Muslims’

Also present at the meeting was Secretary Teresita Deles, presidential adviser on the peace process.

Madani said the real political process would begin once Congress approved and ratified the BBL. The non-passage of the proposed law, he said, might only create frustration, tension, and disappointments.

The BBL, he said, will also open the door for some elements “to radicalize.”
READ: Reject extremists, OIC exec tells Muslims

“You’ll give those radical elements ammunition to say I told you so. So we think it’s important for this to happen because it will also minimize, hopefully eliminate the potential of radicalization,” he said.

“There was no occasion to discuss the Mamasapano because this is completely a separate issue from our desire to put in place the BBL,” said the Senate leader.

“It’s unfortunate that it happened but it should not stand in the way of enacting the BBL which we believe would precisely prevent such unfortunate incidents in the future,” Drilon added.

Madani agreed that the Mamasapano incident was “unfortunate.”

“Exactly like what the excellency has said, we think it’s an unfortunate event. We have expressed our condolences to all those who have lost their lives and to their families,” said the OIC official.

“But you know in a process like this, we all have to expect some hiccups as unfortunate as this tragedy might be. And we fully agree that it should not distract us,” Madani further said.