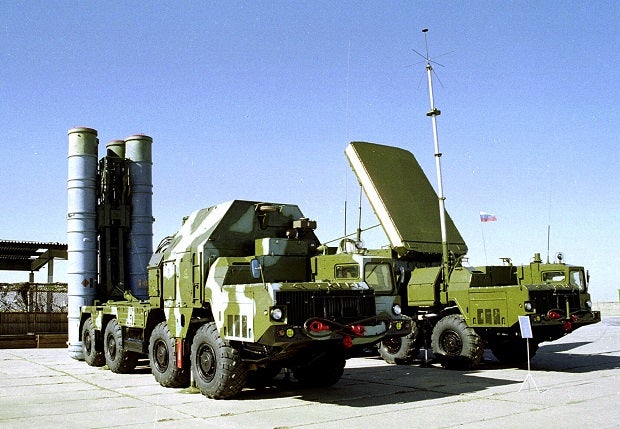 In this undated file photo a Russian S-300 anti-aircraft missile system is on display at an undisclosed location in Russia. The Kremlin says Russia has lifted its ban on the delivery of a sophisticated air defense missile system to Iran. Russia has also reportedly sold more advanced S-400 surface-to-air missiles to China. AP

“The S-400 is definitely one of the top anti-aircraft weapons in the world. It will greatly supplement the People’s Liberation Army’s air defense system, which now has some loopholes in long-range, high-altitude defense of airplanes or ballistic missiles,” said Wang Ya’nan, deputy editor-in-chief of Aerospace Knowledge magazine.

“The system has multiple types of missiles with various ranges, enabling it to safeguard a very large area of airspace. Some of its missiles are even specifically designed to intercept ballistic missiles,” Wang said. “Moreover, some of its launch tubes can store and launch several different missiles, which makes it very convenient and fast to use.”

Russia has a long history of developing anti-aircraft and missile defense weapons, so the S-400 is a concentration of some of the most advanced missile technologies Russia has, such as an active electronically scanned array radar, according to Wang.

“China still lacks experience in the development of long-range air defense systems, especially those that can intercept ballistic missiles. There is no shortcut because the development of such sophisticated weapons requires a great number of experiments and tests. It is a matter of time and resource input,” he added.

New generation missiles
According to Russian media reports, the S-400 is a new-generation, anti-aircraft weapon system capable of engaging any aerial target, including airplanes, helicopters and drones, as well as cruise and tactical ballistic missiles, with a maximum speed of 4.8 km per second. The system’s 40N6 missile can destroy airborne targets at ranges up to 400km.

Anatoly Isaikin, chief executive of the Russian state-run arms trader Rosoboronexport, confirmed on Monday that China has a contract with his company for the purchase of the S-400 air defense systems.

“I will not disclose the details of the contract, but yes, China has indeed become the first buyer of this sophisticated Russian air defense system. It underlines once again the strategic level of our relations,” Isaikin told the Russian newspaper Kommersant.

China clinched the deal in September at a cost of more than $3 billion for the delivery of at least six S-400 battalions, Moscow Times reported.

Du Wenlong, a senior researcher at the PLA Academy of Military Science, said the operational ranges of modern military aircraft and missiles are much longer than their predecessors, so an effective defense system must have long-range missiles that can hit aircraft as well as cruise missiles and tactical ballistic missiles.

“Our air force has deployed the Russian S-300 systems, which are good at dealing with aircraft, but their performance in intercepting cruise missiles and tactical ballistic missiles is not very satisfactory,” he said. “After we commission the S-400, it can work with the HQ-9 and S-300 to form a fully covered air defense network.”

Zhao Zhihua, a senior missile researcher at China Aerospace Science and Industry Corp, a major developer of China’s missiles, said that through the introduction of the S-400, China can gain a lot of experience and expertise on how to operate a missile defense system.

“Operating such a complex system will go beyond our current knowledge and experience, which in turn will teach us things that we don’t know, so it is worthy spending big money buying it,” he previously told the Ordnance Industry Science and Technology magazine.