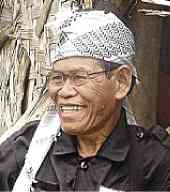 The bottom line, according to him, was the liberation of the Moro people from economic and political bondage to the Philippine Republic. He envisioned an independent state.

When asked to describe Salamat’s vision of self-governance, Kato, however, didn’t use the word independence. Instead, he said two elements were key to Moro liberation—Islamic governance and freedom of the Moro people from political and economic control by Manila.

“So long as the two elements are present” the Moro people will be assuaged even if self-rule will not cover the entire Mindanao and even if there’s no “total independence or separation,” he said.

The two key elements, he said, were what the botched memorandum of agreement on ancestral domain (MOA-AD) provided for.

The MOA-AD, which was crafted under the administration of now detained former President Gloria Macapagal-Arroyo, proposed the establishment of a “Moro homeland” and listed the principles of governing that territory.

“I will support an agreement that completely embodies the MOA-AD,” Kato said.

These ended the yearlong war popularly attributed to the aborted signing of the landmark MOA-AD.

Kato noted that the BIAF’s Soma was effective in all areas while the government’s Somo was selective, not applying to his command and that of Abdullah “Commander Bravo” Macapaar and Aleem Sulayman Pangalian in Lanao del Norte province.

He said the Soma meant that his command would not be able to defend itself from government offensives, making him feel he was being “left alone to be pursued relentlessly by government troops.”

In the wake of clashes in the provinces of North Cotabato and Lanao del Norte, Macapaar, Pangalian and Kato were the subject of massive hunts. Macapaar and Kato carried a P10-million reward money each, while Pangalian had a P5-million prize on his head.

At least 82 warrants of arrest were issued against Kato for alleged atrocities committed in North Cotabato during the post-MOA-AD war.

In December 2009, Kato resigned as head of the MILF’s 105th Base Command covering the strategic areas around the Liguasan Marsh that include towns in North Cotabato and Maguindanao.

He began setting up his own base inside the MILF’s Camp Omar in January 2010. By March of the same year, he announced the formation of the BIFF.

Kato also complained of being tagged a provocateur.

“Provoking war is difficult. We know that the government has strong armed forces,” he said.

Kato said his group’s armed operations had often been misunderstood.

In April 2008, Kato recalled coming to the aid of a rebel leader in Aleosan, North Cotabato, who was being harassed. The operation by Kato’s group was wrongly attributed to an escalation by Kato of offensives following the defeat of the MOA-AD at the Supreme Court.

This involved retaking lands forcibly taken from families of members of the MILF’s 105th Base Command by powerful families in Maguindanao.

Kato was immobilized by the stroke, reducing him to being a mere symbolic leader of the BIFF, which ran under the rotating leadership of Kato’s deputies, Abu Misri Mama, Kagi Karialan and Muhammad Ali Tambako.

With Kato out of the public eye, the three tried hard but failed to secure for the BIFF a revolutionary stature to rival the MILF’s.

Styling the group as a nascent movement for Moro independence, the three led it in launching attacks against government installations, the most serious of which was weeks before the Framework Agreement on the Bangsamoro was signed in 2012.