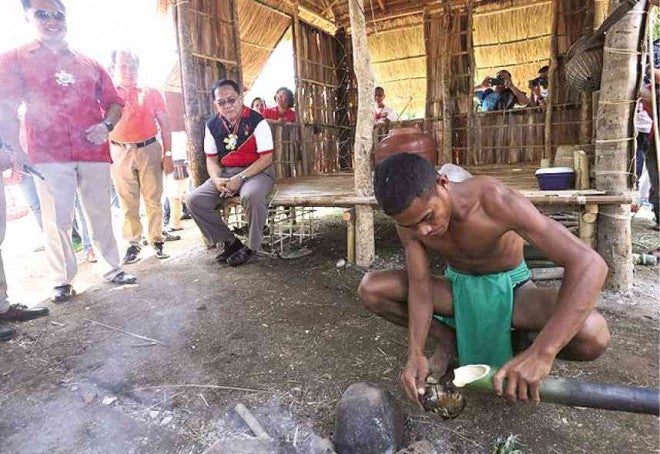 IBA, Zambales—Fruit baskets filled with fresh homegrown mangoes in different shapes, sizes and hues of green and yellow are a common sight in many towns in this province this time of the year.

Tourists and residents stop by fruit stalls to buy and marvel at what many consider to be one of the sweetest varieties of mangoes in the world.

With this as backdrop, the provincial government again staged its annual celebration of bountiful harvest of mangoes but with a little twist.

This year’s Dinamulag Mango Festival, now on its 15th year, still showcases the famous summer fruit that is being grown in the province’s 13 towns.

Organizers have introduced sports events, such as 4×4 off-road challenge, ultra-marathon, skydiving and swimming competitions in the festival’s activities.

“People come to our province to look for mangoes that they can give as gifts,” Ebdane said, noting that mango production is a major industry in Zambales.

The province’s mango production in 2013 was 18,549.58 metric tons, records from the Philippine Statistics Authority showed.

Maria Imelda Sadiwa, tourism and investment promotion officer of Palauig town, said most of the mangoes harvested in Palauig and other towns are being sold outside the province, including Metro Manila.

Festival organizers also recreated the dwellings of Aetas in an outdoor exhibit at the provincial sports field to depict their culture and traditional way of living.

In 1995, the Guinness Book of World Records cited mangoes grown in Zambales as the world’s sweetest. In 2013, the Department of Agriculture cited Zambales mangoes as the country’s sweetest variety.

“Zambales has the best-tasting fresh mangoes in the world and it is our pride to share these to the world,” Ebdane said.