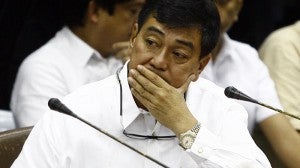 MANILA, Philippines–A housing project for Makati’s homeless was turned into a hotel or “friendship suites” for political allies and local government officials who head the 670 “sister cities” of Makati. They use the friendship suites for free.

The supposed beneficiaries ended up in a squalid resettlement site in deals that allegedly earned Vice President Jejomar Binay P1 billion in kickbacks when he was mayor of the city, his political opponents claimed on Thursday.

At the resumption of the long-running investigation by the Senate blue ribbon subcommittee into allegations of corruption against Binay, former Makati barangay (village) captain Renato Bondal estimated the amount of the purported kickbacks from reports of city engineers and his own computations of alleged overpriced projects.

Bondal testified that the renovation of the three, five-floor buildings into “friendship suites” amounted to P242 million, which he said was “13 times the purchase cost” of the building. Since there were already buildings standing that only needed to be renovated, the project should have cost much less, he said.

“There was no foundation that had to be laid, and there was hardly any roofing that had to be installed. What was done was turn it into rooms,” he said.

Based on the Davis Langdon and Seah Construction Cost Handbook, the renovation cost of the buildings should have been P10,000 per square meter or a total of P47 million, but Makati spent P51,700 per square meter, he said. Thus, the suites were overpriced by P195 million, he further alleged.

“They are using the friendship suites for pure political gain. That hotel has no income that goes into Makati coffers,” he said.

Bondal later told reporters that he did not believe P1 billion was actually spent for the 40-hectare Makati Homeville relocation project in Calauan, Laguna province, for Makati City’s informal settlers. He said the site lacked even the basic necessities like water and electricity.

JV Bautista, a Binay spokesman, dismissed Bondal’s claim. “Overprice is something that has to be technically determined. Overpricing can’t be arrived at after speculative computation,” he said.

Bondal, who is also a lawyer, said about half of the P1 billion in payoffs was a result of overprice. He said he was seeking the Senate’s help to inspect the site, get relevant documents, and invite public works engineers to determine the actual overprice. He did not say how Binay received the supposed kickbacks.

“We have a pretty good feeling that there is an overprice in the Calauan project,” he said in an ambush interview.

Bondal presented to the Senate two residents from the Calauan site. The two testified that the good living conditions that Binay promised them did not materialize.

Bondal told the panel that the Makati Friendship Suites cost P242 million to renovate and were overpriced by P195 million.

In 2002, Makati City, under Binay, approved a resolution to buy three shell buildings in the Guadalupe Bliss Project which it had planned to turn into housing for the poor. It purchased the buildings for P17.23 million.

But, Bondal alleged, this project became a hotel for officials of Makati’s 670-strong “sister cities,” and the informal settlers were sent to Calauan instead.

Sen. Aquilino Pimentel III, chair of the subcommittee, asked Bondal for data on how much Makati spent for the operation of the suites. Bondal, in turn, asked for help from the senators in getting the documents.

As for Makati Homeville, Bondal said Makati spent P120 million to purchase the land in Laguna, and allocated P900 million for the construction of phases 1 and 2 of the project.

There had been good plans for the relocation site, but these did not materialize, he said. It was supposed to be a low-cost subdivision with underground drainage, a water system, electricity and commercial stalls that would provide jobs.

He presented pictures taken in March showing makeshift houses constructed of light materials. He also presented the testimonies, in video and in person, of former Makati residents sent to Laguna who complained about their treatment at the hands of Makati officials.

The relocated residents had to build their makeshift homes using the materials they saved from the demolition of their houses in Makati.

They also said their relocation site in Laguna offered them no livelihood opportunities.

Bondal cited a report saying young women in the area were even forced to turn to prostitution to put food on the table.

“You will wonder. Makati spent a billion for a relocation site that should have been something to be proud of,” he said.

The residents also complained that the promised land titles for their land in Calauan were not given to them. Instead, they were just handed entry passes to the area.

Former Makati Vice Mayor Ernesto Mercado, a former Binay ally, alleged that he made sure the land titles would be given to the relocated settlers before he left his post.

Mario Hechanova, former Makati general services director, confirmed that Mercado gave him the titles, numbering some 200, and was instructed to hold on to them and wait for instructions from Binay. The titles were in the office up to the time Binay stepped down, he said.

Mercado surmised that the land titles were not distributed to the relocated settlers so that they would have to keep on voting for Binay. Mercado also clarified that he turned over 2,000 titles.

Mercado, ditched in the mayoralty race in Makati in 2010 by Binay who instead fielded his son, Jejomar Erwin “Junjun” Binay Jr., is the main witness in the investigations into corruption allegations against the Binays that began with a supposedly overpriced Makati City Hall Building II.

Sen. Alan Peter Cayetano noted that a 150-hectare Batangas hacienda being linked to Binay, and which had a lot of amenities, supposedly cost P500 million to develop, while a 40-hectare relocation project with a P1-billion allocation lacked even the basics.