In a 32-page petition for certiorari, Laude’s sisters Marilou and Mesehilda urged the high court to reverse the orders issued by Olongapo City Regional Trial Court Branch 74 Judge Roline Jinez-Jabalde and compel the Armed Forces of the Philippines (AFP) to turn over Pemberton to a regular detention facility. 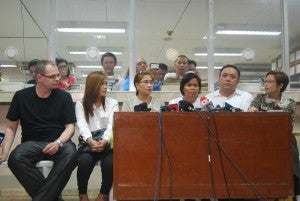 Jeffrey “Jennifer” Laude’s sisters Michelle and Marilou Laude (second and third from left) are pictured in this photo taken during a press conference on Oct. 21, 2014. ALLAN MACATUNO/INQUIRER CENTRAL LUZON

Pemberton remains in detention for the October 2014 death of Laude. Although he is in Camp Aguinaldo, he remains in US custody.

They said Jabalde committed grave abuse of discretion when she dismissed their requests.

Jabalde, in dismissing their request for Pemberton’s transfer, cited technicality allegedly violating the three-day notice rule of the Rules of Court requiring the conformity of the public prosecutor in any pleading filed by a private complainant with the court in the criminal proceeding.

The second petition was filed by the family on Jan. 9 but it was again dismissed by the court on Feb. 18.

“The three-day notice rule is not absolute. Its rationale is satisfied when there is an opportunity to be heard which was clearly present in the hearing for these two motions,” the petition said.

“A liberal construction of the procedural rules is proper where the lapse in the literal observance of a rule of procedure has not prejudiced the adverse party and has not deprived the court of its authority,” it added.

They said even the high court, in previous rulings, said that the purpose for the three-day notice rule is fulfilled when there is an opportunity to be heard.

“Clearly, with respect to petitioner Marilou’s urgent motion, the rationale of the three-day notice rule was sufficiently satisfied as there was notice to the other counsels, such that they were even present and were heard during the Dec. 22, 2014, motion hearing date,” petitioners said.

Petitioners added that the conformity of the public prosecutor is a “mere superfluity” considering that she refused to sign it. They also pointed out that the case is of “transcendental importance and of primordial public interest.”

“That urgent motion asserts petitioner’s right to access to justice recognized both under international law and the 1987 Constitution,” they said.

Petitioners also took note of a provision on the Visiting Forces Agreement which states that Philippines should have custody of US military personnel charged with committing cases such as murder while the case is being heard by the court.

“The refusal of Philippine authorities, including the respondent judge to place respondent Pemberton in the custody of Philippine jail authorities on the basis of the VFA is unconstitutional, on the grounds that it undermines the constitutional powers of courts to hear a jurisdictional matter brought before it and more importantly, it undermines the court’s powers to promulgate rules for the practice of law,” the petition said.

“Consequently, as respondent Pemberton is charged with murder—a nonbailable crime—it is essential that the respondent judge order the transfer of custody of the accused to the Olongapo City Jail, as custody is a means by which the trial court exercises its jurisdiction over accused,” it added. RC

Pemberton skips murder trial; another witness ties him to Laude