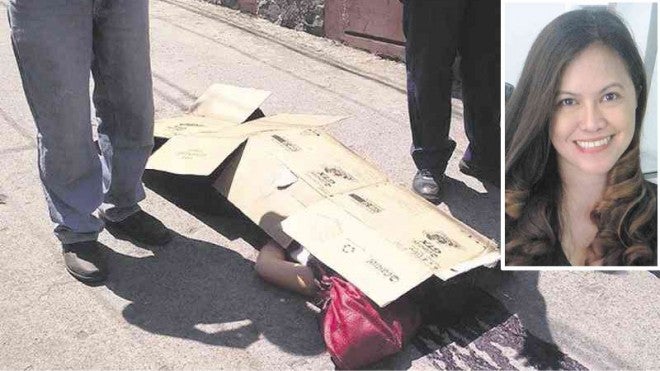 DEATH OF A JOURNALIST The body of Melinda “Mei” Magsino, a former Inquirer correspondent who had reported on corruption and “jueteng” (an illegal numbers game) in Batangas province, is covered with a piece of cardboard after she was gunned down at high noon on a street in Barangay Balagtas in Batangas City on Monday. INSET PHOTO FROM FACEBOOK ACOUNT OF MAGSINO/REJECT RPT20 MOVEMENT-BATANGAS CITY FACEBOOK PAGE

“The footage showed that the suspect was waiting for Magsino at a street corner near her rented apartment,” Calabarzon NBI head Constantino Joson said.

He said Magsino could be seen in the CCTV as she emerged from her rented apartment and how she was shot in the nape by a gunman whose face was not covered.

Joson said that at this time they could still not establish the motive of the killing but he said what is certain was the killer was a hired gun.

Joson said the personal belongings of Magsino were given to the NBI by her family.

He said the NBI had interviewed witnesses of the shooting but most of them declined to give an official statement.

Joson said Magsino’s family maintained that she was killed because of her exposés on alleged irregularities in the local government of Bauan town in Batangas rather than the love triangle angle being floated by people who could have something to do with her death.

The NBI has started the forensic examination of the cell phone and laptop of Magsino, according to the bureau’s computer division head.

“We are retrieving deleted messages and calls for investigators to analyze the data,” NBI-Cybercrime head agent Ronald Aguto Jr. told the Inquirer.

Aguto said that based on the contents of the cell phone and the laptop, investigators could determine who could be the mastermind of the journalist’s death.

“It would give investigators an idea of her activities that could provide leads,” Aguto said.

At the Senate, Sen. Ralph Recto on Wednesday urged the government to create a fund for information that would lead to the capture of the killers of Magsino, adding that he was donating P100,000 to the fund.

Recto, who is married to Batangas Gov. Vilma Santos, joined those who had condemned Magsino’s killing and called on law enforcers to immediately bring justice for her death. The government should also end the impunity surrounding the killings of journalists, he said.

Magsino, 40, was shot dead a few meters from her apartment in Batangas City on Monday.

Police are looking at several possible motives for the killing.

According to Recto, Magsino was gutsy and “gave Batangueños an image of what a crusading and courageous journalist should be.”

“As a member of the press, Mei practiced her craft with guts and grit, her prose and insight as sharp as a balisong (fan knife), which she used to peel the falsehoods that hid the truth, and prick the conscience of the people and the ego of the powerful,” the senator said in a statement.

He said that even if Magsino was no longer with a media organization, this had not stopped her from social commentary. Her words brought about the change that she wanted to see in her province, he added.

“She died with her boots on, ‘comforting the afflicted and afflicting the comfortable’ to the end, and it was her desire to search for and speak out the truth that led her enemies to cowardly censor her forever,” he said.

Recto also said Magsino’s killing should not be one of those cases in which journalists were killed for reporting the truth.

She was the 32nd journalist killed in the country under the Aquino administration, and the 173rd journalist slain since 1986.

Ex-PDI reporter spoke of threat to her life 2 years ago, says friend