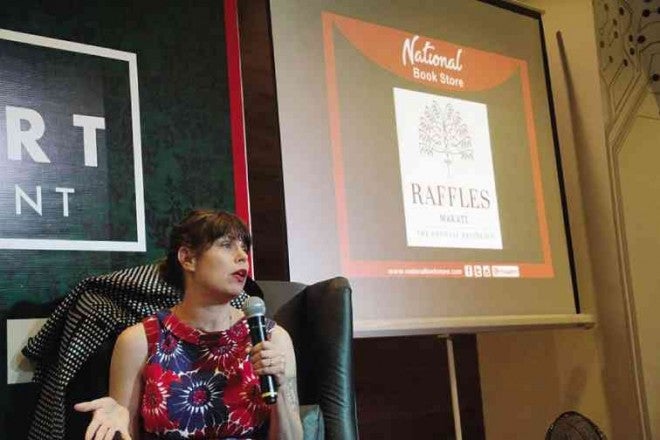 Although looking confident, young adult novelist E. Lockhart went onstage at the International School Manila with the words “Don’t panic” written on the back of her hands.

It was what the main characters in her book “We Were Liars” did—they wrote their life mottos on the back of their hands.

Lockhart, who transitioned from children’s picture books to young adult novels to with “We Were Liars” thriller-drama, told her audience composed mostly of students that she liked to challenge herself constantly by doing different genres.

“Most of my books are social-critique comedies and I still write children’s books. But I like to read psychological thrillers, so I wanted to see if I could write one,” she said.

For “We Were Liars,” which received Goodreads’ award for Best Young Adult Novel in 2014, Lockhart said she was inspired by a minigenre of books where the characters got stuck on an island and killed each other.

Lockhart, who has a graduate degree in Victorian novel, admitted she often imitated books she has admired since starting writing in third grade.

“I wrote novel-length imitations… and then I stopped… I then unpacked the work of these writers,” she said. “People are so scared of copying that they are pressured to be original… they don’t realize how much they could learn from studying other people’s work.”

Researching on similar types of art, Lockhart said, did not mean copying or being derivative, but going in with a smart eye and looking for techniques those people were using.

She also said people should read outside their comfort zone. “I think they should read what they love and not be ashamed, even if other people think it’s trashy, easy, or silly. Push yourself to read beyond what you already know. Read a writer of a different culture or background.”

She herself is currently halfway through 15 books, including Eleanor Catton’s “The Luminaries” and Sidney Sheldon’s “If Tomorrow Comes.”

Lockhart explained to her audience her writing techniques.

“When you are trying to make a piece of art, a good way to start is with an emotion,” she said. With emotions, she added, the story would involve some kind of movement.

“Happiness is fairly stagnant. You don’t take action when you are happy because you’re happy or content,” she said. “But with other emotions like anger, fear, or even grief, there is a driving force.

“So what you are looking for are emotions that could be something small that happened to you, something ordinary, or unusual… or could be based on something that has a larger and more political situation,” she said.

The story “The Disreputable History of Frankie Landau-Banks,” Lockhart said, came from the personal experience of taking over the world of every boy she dated in high school.

After finding the driving emotions, Lockhart said, writers should do three different kinds of research—regular, experiential and similar forms.

Regular research, she said, was like what students did in school using books and the Internet.

“Experiential is when you want to feel what something looks like. If you go grocery shopping and put your writer’s hat on, everything will look different,” Lockhart said. “You are going to notice the sounds, sights, and smells…”

For the four-book series “The Boyfriend List,” Lockhart said she interviewed all her friends about the worst things that happened to them in middle or high school.

A lot of her friends’ stories, she said, made it to the books “and they were better stories than what I would have thought of by myself,” she said.

While her characters were not real people, Lockhart said, she put a piece of herself and fused it with someone else to invent the characters.

In “We Were Liars,” Lockhart said it was difficult to write a character who did not know what was going on in her life. Cadence Sinclair Eastman had selective amnesia.

“I read a lot of amnesia books [that] explained how these people reined their memory back so it didn’t seem cheesy. I looked at how the writers did the story of those amnesiacs, took note of it and made use of those techniques,” she said.

When research was done, Lockhart said “to make [the work] worthwhile, the story should bleed.”

She said every line should be relevant to the meat, the flesh, the heart of the story. The artist should describe the setting—it could be a room—and its details.

“If nothing exciting is happening in that room then it’s not bleeding. You should cut it,” Lockhart said. “I make sure that my prose bleeds to the best of my ability.”

Lockhart’s most important advice to her young audience was: “Do not make something brilliant, but instead create a piece of junk.”

She said it would be paralyzing to make a piece of art with the idea that it should be good or technically polished.

“You say to yourself that you are not going to make something brilliant but just something… a bad, stupid thing… You tinker and tinker some more. At least you made a thing you can improve,” she said.

Lockhart said her last day in the Philippines was “fun,” signing books for four and a half hours. “I think it’s short for a Filipino book signing but it’s long for an American one,” she said.

She revealed she was working on a new novel to be released soon: “It’s kind of a secret but it has something to do with murder.

And she wasn’t lying.