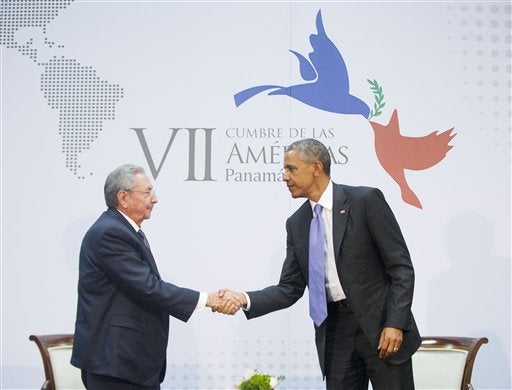 PANAMA CITY — President Barack Obama and Cuba’s Raul Castro sat down together Saturday in the first formal meeting of the two country’s leaders in a half-century, pledging to reach for the kind of peaceful relationship that has eluded their nations for generations.

In a small conference room in a Panama City convention center, the two sat side by side in a bid to inject fresh momentum into their months-old effort to restore diplomatic ties. Reflecting on the historic nature of the meeting, Obama said he felt it was time to try something new and to engage with both Cuba’s government and its people.

“What we have both concluded is that we can disagree with a spirit of respect and civility,” Obama said. “And over time, it is possible for us to turn the page and develop a new relationship between our two countries.”

Castro, for his part, said he agreed with everything Obama had said — a stunning statement in and of itself for the Cuban leader. But he added the caveat that they had “agreed to disagee” at times. Castro said he had told the Americans that Cuba was willing to discuss issues such as human rights and freedom of the press, maintaining that “everything can be on the table.”

“We are disposed to talk about everything — with patience,” Castro said in Spanish. “Some things we will agree with, and others we won’t.”

And nothing is static, he added, noting that disagreements today could turn into areas of agreement tomorrow. “The pace of life at the present moment in the world — it’s very fast.”

Not since 1958 have a U.S. and Cuban leader convened a substantial meeting. Dwight Eisenhower and Fulgencio Batista met that year, and the following year, former Cuban President Fidel Castro met with Richard Nixon, who was vice president at the time.

But relations quickly entered into a deep freeze amid the Cold War, and the U.S. spent decades trying to either isolate or actively overthrow the Cuban government.

In a stroke of coincidence, Eisenhower’s meeting with Batista in 1958 also took place in Panama, imbuing Saturday’s session between Obama and Castro with a sense of having come full circle.

The historic gathering played out on the sidelines of the Summit of the Americas, which this year included Cuba for the first time. Although the meeting wasn’t publicly announced in advance, White House aides had suggested the two leaders were looking for an opportunity to meet while in Panama and to discuss the ongoing efforts to open embassies in Havana and Washington, among other issues.

In his brief remarks to reporters at the start of the meeting, Obama acknowledged that Cuba, too, would continue raising concerns about U.S. policies — earning a friendly smirk from Castro.

“We are now in a position to move on a path toward the future, and leave behind some of the circumstances of the past that have made it so difficult for our countries to communicate,” Obama said.

The flurry of diplomacy, which kicked off Friday evening with an historic handshake between Obama and Castro, was aimed at injecting fresh momentum into their delicate plan to restore normal relations between their countries. The two presidents sent shockwaves throughout the hemisphere in December when they announced the plan for rapprochement, and their envoys have spent the ensuing months working through thorny issues such as sanctions, the re-opening of embassies and Cuba’s place on the U.S. list of state sponsors of terrorism.

Although earlier in the week Obama suggested a decision to remove Cuba from the list was imminent, he didn’t say Saturday whether he would move ahead with that step. The U.S. State Department recently concluded a review recommending Cuba be taken off the list, fueling speculation that Obama would use the occasion of the summit to announce the move.

Removal from the terror list is a top priority for Castro because it would not only purge a stain on Cuba’s pride, but also ease its ability to conduct simple financial transactions.

For 50 years, US tried but failed to oust Castro