‘Hot Pablo’ cools off as typhoon survivors find no markets 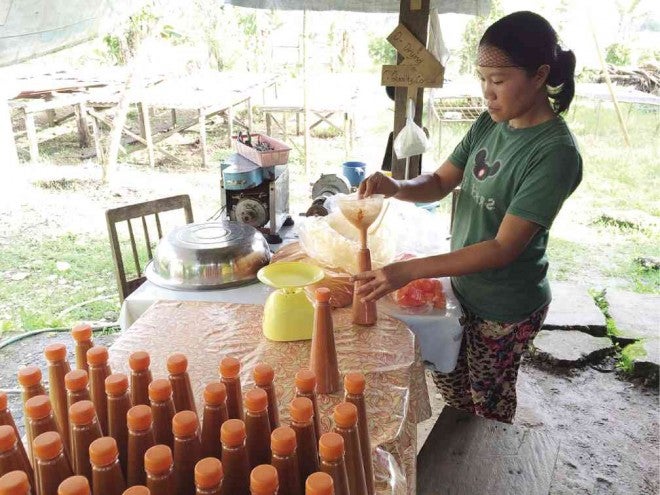 CATEEL, Davao Oriental—The lack of markets for the province’s hottest product, chili sauce, is removing the bite from what farmers had thought to be their way out of poverty but which is now proving to be their biggest mistake.

The hype around the chili sauce, which local traders gave the brand Hot Pablo, has apparently simmered down with farmers now complaining of lack of market and many suffering huge losses as a result.

Hot Pablo is a take on President Benigno Aquino III’s quip during a visit endorsing the province’s chili sauce as a potential income source for farmers, telling his audience that farmers could name their products after Typhoon “Pablo,” which devastated the province in 2012.

Shortly after Pablo struck, at least 1,000 farmers in Cateel and neighboring municipalities planted hot pepper when they saw it as an alternative to rice and coconut, two of the province’s main crops that were hit by the storm.

“We receive 1,000 kilos of fresh chili daily, but we can hardly pay the farmers. We still owe them about P1.5 milion,” said Jeenith Tarzona, a staff member at the Subangon Dumang Makers (SDM), a chili processing enterprise in Barangay Poblacion here.

Tarzona said they used to receive supply enough for the local market, but the number of farmers soon shot up to about 1,000 from just a hundred, after Mr. Aquino visited the town early last year and encouraged farmers to go into chili farming and processing.

The Department of Trade and Industry (DTI) had said chili cultivation was a lucrative venture as it generated at least P6 million in sales during trade fairs and in souvenir shops. Farmers could earn at least P187,000 per hectare, DTI had said.

Locally known as “dumang,” the tongue-burning pepper was also being cultivated in the towns of Baganga, Boston, Caraga and Tarragona in Davao Oriental and Compostela town in Compostela Valley province, just 65 kilometers from Cateel.

Trade officials saw a huge market for Hot Pablo with buyers from such countries as Singapore and Indonesia showing interest.

But the product could not be marketed internationally and in other Philippine markets without approval from the Food and Drug Administration (FDA), which led to an increase in supply but not in demand.

Without other markets, supply just kept on coming in.

“Before, our supplies were just enough for our market. But nowadays, we’re flooded with fresh chili and our market is shrinking,” said Tarzona.

She said their group was able to sell 2,500 kilograms of powdered chili worth P1 million on Feb. 24 last year but the stock was taken by the buyer only on May 22.

Some farmers have since decided to stop chili farming.

“Some now even blame us for their predicament,” said Tarzona. “Farmers have cleared their farms to go into chili cultivation, but there was no profitable market to speak of,” added Tarzona.

“We have stopped accepting new deliveries. Many of the remaining stocks were sent back to the farmers to let them dispose of their chili,” Tarzona said.

Tarzona said they want the government and even nongovernment organizations that helped them after Pablo to help find more lucrative markets for their hot pepper products.

“We have quality products but we can’t find enough markets. I’m asking P-Noy to help us once more,” she said. Frinston L. Lim, Inquirer Mindanao

Read Next
Mindanao as haven for persecuted Jews
EDITORS' PICK
On Day 2 of implementation, gov’t says workers now exempt from ‘no vax, no ride’ policy
Gear up and get ready to play with Yamaha Mio Gear
DOH: 28,471 new COVID-19 cases in PH; active cases now 284,458
Metro Manila posts lowest temperature yet this ‘amihan’ season at 19°C
Over 3 Million worth of prizes to be won at Smart Padala’s SENDali Manalo Promo!
Acer starts the year off strong with the Aspire Vero National Geographic Edition
MOST READ
Emma Stone calls Andrew Garfield a ‘jerk’ after he ‘lied’ about his ‘Spider-Man: No Way Home’ appearance
LOOK: Edu Manzano, Cherry Pie Picache enjoy Palawan with her son Nio Tria
Unvaccinated has rights but it has limits—DOJ
Retirements prompting major reshuffle in PH military
Don't miss out on the latest news and information.