Pakistan votes to stay out of Saudi-led airstrikes in Yemen 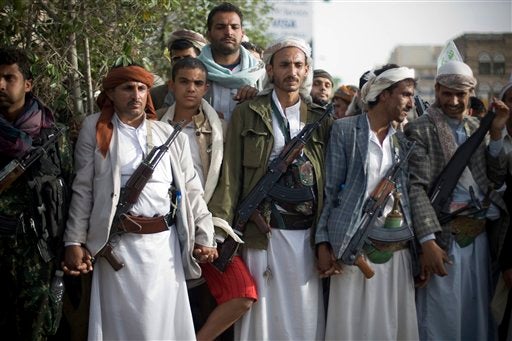 Shiite rebels, known as Houthis, gather during a protest against Saudi-led airstrikes in Sanaa, Yemen, Friday, April 10, 2015. Pakistani lawmakers on Friday unanimously voted to stay out of the Saudi-led air coalition targeting Shiite rebels in Yemen in a blow to the alliance, while planes loaded with badly needed medical aid landed in Yemen’s embattled capital, Sanaa, in the first such deliveries since the airstrikes started more than two weeks ago. AP

SANAA, Yemen — Pakistan’s parliament voted unanimously Friday to stay out of the Saudi-led air campaign targeting Shiite rebels in Yemen, offering instead to mediate a solution, in a blow to Saudi Arabia’s attempts to build a Sunni front in an increasingly sectarian conflict.

Pakistan’s decision is unlikely to greatly affect the Saudi-led coalition’s military capabilities. But it was an embarrassment to the kingdom from a traditionally close ally, now reluctant to get pulled into a conflict that is threatening to escalate into a new proxy war between Saudi Arabia and Iran.

Saudi Arabia had been seeking to expand the coalition, made up of fellow Gulf nations as well as Egypt and Sudan, which has waged a nearly 3-week campaign of airstrikes against the rebels, known as Houthis, and is reportedly considering a ground incursion. At the same time, Shiite powerhouse Iran, which backs the Houthis, also lobbied Pakistan and other Sunni nations to back a cease-fire and a negotiated end to the conflict.

A senior official in the United Arab Emirates — a member of the coalition — lashed out angrily at Pakistan, accusing it of choosing Iran over the Gulf nations at a time when they face an “existential confrontation” in the Yemen conflict.

Anwar Gargash, the UAE’s minister of state for foreign affairs, said on his Twitter account that Pakistan should look out for its strategic relations with Gulf nations, pointing to the Gulf’s economic and investment help to the South Asian nation.

“Contradictory and ambiguous positions in this existential matter will cost (Pakistan) dearly,” he wrote.

Airstrikes along with escalated fighting on the ground between the Houthis and supporters of Yemen’s beleaguered president threaten to push Yemen, the Arab world’s poorest country, into collapse. On Friday, the U.N. and International Committee of the Red Cross succeeded in bringing in the first two plane loads of aid, delivering tons of medical and humanitarian supplies to the capital, Sanaa, to relieve hospitals overburdened by casualties.

Saudi Arabia and its allies, including the United States, accuse Iran of arming the Houthis. The Gulf countries view the rebels’ power grab as a move by Iran to establish a stronghold on their southern flank. Iran says it backs the rebels politically and with humanitarian aid but denies sending weapons. The Houthis have full or partial control over 11 of Yemen’s 22 provinces, backed by military units loyal to ousted autocrat Ali Abdullah Saleh.

The current president, Abed Rabbo Mansour Hadi, was forced to flee the country last month, leaving a shaky collection of forces on the ground to fight the Houthis — including military units still loyal to him, militiamen and Sunni tribesmen. Al-Qaida’s Yemen branch is also fighting the Houthis. 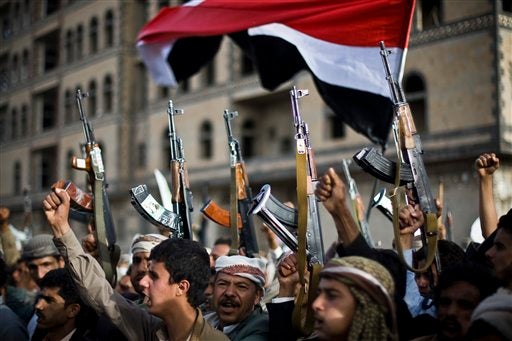 Shiite rebels, known as Houthis, hold up their weapons as they attend a protest against Saudi-led airstrikes in Sanaa, Yemen, Friday, April 10, 2015. AP

The coalition is reportedly considering a ground incursion, likely including Saudi and Egyptian forces, once airstrikes have sufficiently weakened the Houthis and Saleh’s forces, a process that could take weeks. On Friday, Egypt’s defense minister met with Saudi King Salman in Riyadh to discuss the coalition’s operations.

According to Pakistani officials, Saudi Arabia asked Pakistan to send troops to take part in the campaign. Pakistani troops have considerable experience fighting militants in mountainous terrain similar to Yemen’s.

After the parliament vote Friday, a spokesman for the Saudi-led coalition, Ahmed Asiri, still held out hope the Pakistani government would choose to participate. But he said even if it didn’t, other coalition forces are as well trained as the Pakistanis. “Not joining on the ground, sea or sea level will not obstruct the coalition operations,” he told reporters.

The debate put Pakistan in an awkward position. It has long had military ties to Saudi Arabia. Prime Minister Nawaz Sherif was sheltered by Saudi Arabia after the coup that overthrew him in 1999. For weeks, Sunni hard-liners, including a group linked to militants, have organized rallies around Pakistan denouncing the Yemeni rebels and urging Islamabad to join the coalition.

But participation threatened to enflame Pakistan’s own sectarian divisions. Pakistan is predominantly Sunni but has a Shiite minority that is frequently targeted by Sunni extremists.

It also has important ties with Iran, with which it shares a long border. Iran’s foreign minister, Javad Zarif, was in Islamabad for several days before the vote, meeting Pakistani officials and calling for a cease-fire and negotiations on creating a broad-based government in Yemen.

On Friday, after days of debate, Pakistan’s legislature declared the country “should maintain neutrality in the Yemen conflict” so that it can help negotiate a diplomatic solution. Sirajul Haq, the head of Pakistan’s powerful Jamaat-e-Islami Pakistan party, said Islamabad could “play the role of a mediator.” Sherif was present, suggesting his support for the decision.

It called for Pakistan’s diplomats to “initiate steps” before the U.N. Security Council “to bring about an immediate cease-fire in Yemen” and warned of regional implications if the conflict becomes an all-out sectarian war.

In a nod to Saudi Arabia, they expressed “unequivocal support” for the kingdom and vowed to “stand shoulder-to-shoulder” with it if its territory or people came under threat.

Yemeni political analyst Sami Ghaleb said Pakistan’s position was “disappointing” but won’t cause cracks in the coalition. However, he said, it could prompt Saudi Arabia to “reconsider” its approach. “The airstrikes alone are not yielding results so far,” he said.

Despite airstrikes that targeted weapons depots, installations and command center of the rebels and allied forces, their fighters still managed to make significant territorial gains on Thursday, capturing Ataq, the capital of oil-rich Shabwa province. The area is also a stronghold of al-Qaida.

On Friday, a suicide bomber hit a police department in Shabwa’s Bayhan district, controlled by the Houthis, tribal officials said. Al-Qaida claimed responsibility for the attack, saying dozens were killed and injured, though the casualties could not be independently confirmed.

Meanwhile, humanitarian groups are struggling to cope with the rising casualty numbers and shrinking food and fuel supplies. The World Health Organization said Wednesday that at least 643 civilians and combatants have been killed since March 19, before the air campaign began. At least 2,226 have been wounded, and another 100,000 have fled their homes.

“The humanitarian situation in Yemen is getting worse by the hour,” the U.N. humanitarian coordinator in Yemen, Johannes van der Klaauw, told reporters in Geneva on Friday. He urged all parties to agree to “an immediate humanitarian pause” to deliver life-saving aid.

The two aid planes, sent in by the ICRC and the U.N. Children’s agency, were the first international assistance deliveries to arrive in Sanaa. A smaller delivery made it into in the southern, port city of Aden by boat earlier this week.

The cargos totaled 32 tons (35 U.S. tons) of supplies, enough to treat up to 1,000 wounded, provide water for 80,000 people and micronutrients for 20,000 children, according to officials from the two organizations.

“The supplies we have managed to bring in today can make the difference between life and death for children and their families — but we know they are not enough, and we are planning more of these airlifts,” the UNICEF representative in Yemen, Julien Harneis, said from the Jordanian capital, Amman.

Ground fighting between Hadi loyalists and rebel and allied fighters continued in the port city of Aden, Yemen’s second-largest city and a main bastion of Hadi’s allies.

Aden’s oil refinery, the main source of fuel for the city, was shut down after Hadi loyalists stormed it, accusing it of shipping fuel to their rivals, a refinery official said, speaking on condition of anonymity because he was not authorized to speak to the media.