Lacson says he is open to run for president 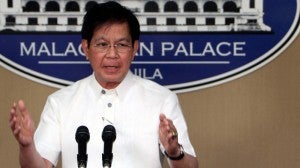 Backed by retired military and police officers, former senator Panfilo Lacson said he is open to run for president in the 2016 elections.

“Yes, I confirm,” Lacson said in a text message on Friday when asked about his reported intention to join the presidential race.

“Last night, I was invited by several retired AFP and PNP officers, some of whom were not able to sign the manifesto that came out in the newspaper ads and most of them pledged to help in the effort even before I make the decision to go for it. That’s where we are now,” he said.

AFP is Armed Forces of the Philippines, while PNP is Philippine National Police. Lacson was PNP chief during the time of then President and now Manila Mayor Joseph Estrada.

The manifesto he was referring to was a full-page ad signed by 35 retired police and military officials that recently appeared in broadsheets including the the Philippine Daily Inquirer urging both Senator Grace Poe and Lacson to “run in tandem for higher office in 2016.”

Asked if he would run as an independent backed by retired military and police officers in case he makes a final decision, Lacson said: “For a start, yes, that’s where it stands.”

“Politics in our country and even in other countries of the world is always bound by numbers, and support from political parties and groups is largely dependent on the winnability of prospective candidates. At least that’s what I learned in the 12 years that I spent in the Senate.”

“Of course, there are those who support because they are believers and share the same advocacies as their prospective candidate. Let’s face the reality that most of our political leaders are natural fence-sitters which is a normal course in politics,” he further said.

In an earlier interview with DZMM, the former senator categorically said that he is open to run for the highest position in the land.

“When asked if I’m considering another run for the presidency, I said, “if you are asking if I have the intention, yes, I have the intention but my decision will depend on many factors which I am currently discussing with my old and new regional leaders, coordinators and volunteers,” Lacson said, explaining his statement in the said radio interview.

“I also mentioned that while I’m rating very high in the senatorial surveys (58.3% as of the latest Pulse Asia survey), the same amount of support and approval do not seem to resonate in the presidential survey. So I asked them to find out why and think of ways to translate even a fraction of that 58% into a higher position,” he said.

Lacson earlier said that he would make a decision about his plans in 2016 either in August or September this year.

“August or September this year should be a practical time to decide,” he said in a text message last March 26.

Lacson first ran for president in 2004, but placed only third behind Gloria Macapagal-Arroyo and the late Fernando Poe Jr.

Read Next
21 people found drowned off Haiti’s north coast, 17 missing
EDITORS' PICK
Look Through: The fate of impounded stray dogs
House energy committee chair Arroyo bats for cheap electricity
What to watch out for when selecting a video surveillance solution
23,000 cops to be deployed nationwide for school reopening
Unleash the photographer in you this World Photography Day with vivo smartphones
DOH says COVID-19 cases plateauing, but public shouldn’t be ‘complacent’
MOST READ
Korina Sanchez reunites with former ABS-CBN co-anchors Julius Babao, Cheryl Cosim
Sharon Cuneta asks for prayers for friend in ICU who suffered silent stroke
QC school’s shutdown violated rules – CHEd
Light therapy could be the answer to your sleep problems
Don't miss out on the latest news and information.