CCT beneficiary to study civil engineering in UP 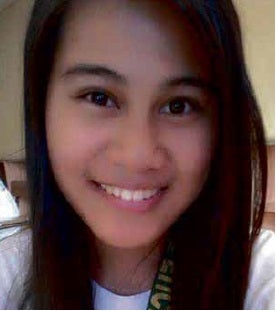 CHASING THE DREAM High school valedictorian Alyannah Terite, 15, a beneficiary of the government’s
conditional cash transfer program, is one of the program’s 333,673 recipients this year. Terite comes
froma family that makes do with P500 a day.

Defying extreme poverty, Alyannah Terite has achieved one of her goals in her young life and will be attending the country’s top state university in August.

Terite, a beneficiary of the government’s conditional cash transfer (CCT) program, passed the University of the Philippines College Admission Test (Upcat). She will be taking civil engineering.

The 15-year-old is not your average beneficiary of the CCT program. She is the valedictorian of the Pasay City Science High School and hails from a family that makes do with P500 a day.

“I get P500 as a monthly stipend, which I use as spending money for my projects and other school-related expenses. It was really a big help to my family,” Terite said of the CCT program.

Under the program, beneficiaries in elementary school receive P300 a month for school expenses while those in high school get P500. In return, their families must ensure their regular attendance in school. Pregnant mothers must have regular checkups at health centers.

She and 4,000 other beneficiaries in southern Metro Manila who graduated from high school were feted by the Department of Social Welfare and Development (DSWD).

On Thursday, the DSWD held a post-graduation celebration for the beneficiaries at the Philippine International Convention Center in Pasay City.

In Metro Manila alone, there were 21,844 beneficiaries who finished high school this year.

Terite’s parents eke out a living selling barbecue on sticks in front of their house, earning P300 to P500 a day.

While she was able to focus on her studies, she admitted that her biggest challenge was not her lessons but the expenses that came with studying in a science high school.

“It is really costly for me. My parents try to budget their earnings but sometimes it is really not enough. I am thankful that the government helps us,” Terite, a CCT program beneficiary for the past two years, said.

Under the expanded CCT program, the government helps in the schooling of children 18 and below whose families are enrolled in the CCT program.

After finishing high school, the beneficiaries have the option to seek employment with the help of the Department of Labor and Employment, skills training through the Technical Education and Skills Development Authority, or apply for a student grant and aid through the Commission on Higher Education (CHEd).

Social Welfare Secretary Corazon Soliman said of the 4,000 graduates feted on Thursday, 95 shone academically and graduated as topnotchers and awardees in various fields.

The CCT program, or the Pantawid Pamilyang Pilipino Program, has been heavily criticized as a “dole’’ by some sectors while others claim that the program’s budget is excessive.

Interior Secretary Mar Roxas, who was one of the guests at the celebration, appealed to the students and their parents to continue reaching for their dreams, even if it meant sacrifice and hardship.

Aside from the high school graduates, the DSWD also presented two former beneficiaries who graduated from college with the help of CHEd and are now licensed teachers.

“These kids only get P500, which is little. But you can see that with the perseverance of the children and their parents, they are now able to finish school,” Soliman said.

She noted that the age of 13 to 15 years old, or the high school years, had the highest rate of dropping out from school, usually due to poverty.

In the Terite family, Alyannah and her younger sister, 13-year-old Alizzah, both receive P500 monthly for their school needs.

No time for hobbies

With school starting as early at 7 a.m. and ending late at 5 p.m., Terite has no time for other activities or hobbies, choosing instead to come home and do her homework for the day.

An aspiring civil engineer, her favorite subject is Math while English is her weakest subject.

She took the Upcat and the De La Salle University (DLSU) College Admissions Test, passing both exams. She tried out for accountancy at the DLSU but chose to go to the state university instead.

“I really did not expect this. UP is such a prestigious university and I did not think I would pass,” she said.

Terite is planning to enroll under the socialized tuition system being implemented in UP in hopes that her family’s income bracket would minimize her tuition.

She also has the option to seek help from the CHEd’s student grant in aid program.

“It is my dream to be an engineer. I want to be able to help my family once I achieve my dreams,” she said.