Suffering from an illness and fearing execution, he escaped the infamous 1942 Bataan death march, which resulted in the deaths of more than 70,000 soldiers and guerrillas, by fleeing with two other comrades.

He said they decided to escape after seeing how the Japanese treated their fallen comrades. Many of those injured and sick were beaten up and killed.

Just as they were being rounded up along the road by Japanese soldiers, Valenzuela said he and his companions ran back to the mountains. They scaled the mountain slopes by clinging on to rope-like vines.

After their ordeal, Valenzuela managed to return to his hometown in Bulacan with the help of a group of civilians they encountered along the way.

The 95-year old veteran laughed as he recalled how scared he was when they made him ride a small boat.

“Hindi ako marunong lumangoy (I didn’t know how to swim)!” said the retired officer, who survived a war that killed more than a million Filipinos.

For veterans like Valenzuela, however, the struggle for due benefits is not yet over.

Valenzuela receives P6,700 per month from the Philippine government – P5,000 worth of old age pension and P1,700 worth of administrative disability pension.

(That’s not even enough for my medication. I have to take 12 different tablets a day. There’s one for blood pressure, sugar level, the heart, diabetes. That’s not enough.) 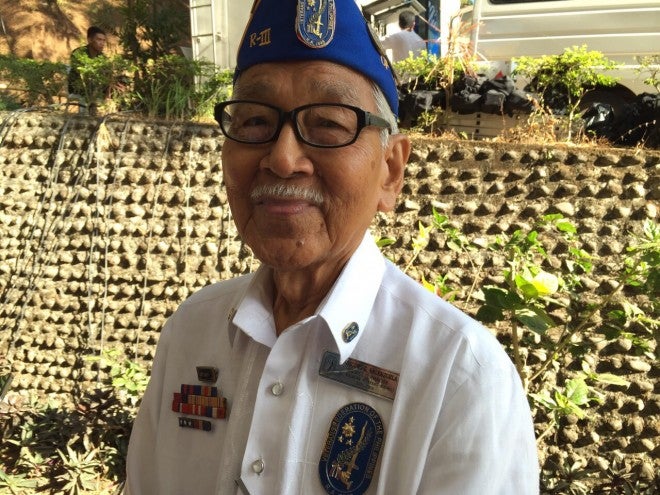 Valenzuela, who attended the 73rd anniversary of the Day of Valor in Mt. Samat in Pilar, Bataan, said he is hoping for the passage of bills benefiting war veterans.

Currently, there are four bills in Congress seeking to increase the old age pension of veterans to P10,000. However, they have yet to be approved despite similar measures being deliberated on by lawmakers for more than two decades.

The Philippine Veterans Affairs Office (PVAO) said it is pushing to increase old age pension to P20,000, especially for senior veterans or those who served during the World War II and the Korean and Vietnam war but have not been receiving retirement pension from the Armed Forces of the Philippines.

Of the pensioners being managed by the PVAO, 142,044 are receiving old age monthly pension of P5,000. Of that number, only 12,297 are World War II veterans. More than 50,000 are surviving spouses and the rest are post-World War II pensioners.

Valenzuela said he also hopes the widows of war veterans would receive more.

“Nagsakripisyo din ang mga yan. Yung iba may sakit din (They have sacrificed a lot. The others are also sickly),” he said.

In a media release, the PVAO said that among the “veterans’ wish list” is the rationalization of disability pension rates.

“Since 1994, the amount of Disability Pension ranging from P1,000 to P1,700 depending on the rate, has not been increased despite serious economic downturns in recent years,” it said.

A number of the veterans and surviving spouses who attended the ceremonies in Bataan on Thursday said they have not received any pension or benefit from the government. Nevertheless, they have been consistently attending the Day of Valor rites as Mt. Samat. One widow said she was looking forward to the entertainment, which included children participating in song and dance presentations.

In his speech, President Benigno Aquino III said his administration has focused on good governance to improve and expand the benefits of war veterans.

He said the government has already improved its revalidation program, which ensures that only “legitimate veterans” receive full benefits.

“The money set aside for you now goes directly to you. In fact, as of March 2015, the number of pension accounts of living veterans and of dependents of injured or deceased veterans handled by the PVAO has increased to 198,169,” he added.

Aquino said 15,571 dependents are also receiving educational assistance while 8,760 veterans and their dependents have availed of funds allotted for healthcare.

“The state is taking care of our veterans,” he said during the Day of Valor, which coincides with the Philippine Veterans Week.

Meanwhile, Valenzuela, who now uses a cane to support himself, said he is looking forward to returning to Mt. Samat next year.

US, Japan echo pledge of defense, maritime cooperation with PH

On Day of Valor, Goldberg honors SAF 44, all freedom fighters