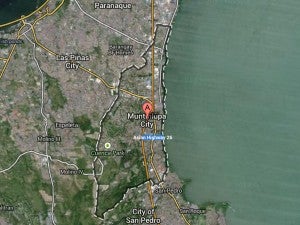 A 56-year-old cook lost her legs and her life after she was pinned between a speeding car and a parked passenger jeepney in Muntinlupa City early Thursday morning, a radio report said.

Victim Shirley Rabusa, 56, was about to board the jeepney when the car rammed her from behind and caught her legs between the car bumper and the rear of the jeepney, radio dzMM said.

The impact broke both her legs which were severed from the thighs, the report said.

She died on the spot.

According to the report, Rabusa, who worked for a family in Southbay Subdivision, Muntinlupa, was on her way to a market in Alabang when the accident happened at about 5:10 a.m. at the corner of West Service Road and Villongco street.

The report said the jeepney driver, Vermilio Gordon, had just dropped off a passenger at the corner of Villongco when Rabusa tried to get on.

Suddenly, the car driven by Jose Emmanuel Ranola, 25, came speeding and tail ended the jeepney, catching the woman in between the two vehicles.

“Hindi niya (Rabusa) nakita yung kotse dahil nakatalikod siya,” (She did not see the car because her back was turned against it) dzMM said, citing witness accounts.

Witnesses told the radio that Ranola tried to flee but he was collared by bystanders.

Ranola was taken to the Muntinlupa City police station, where he was undergoing investigation. CB