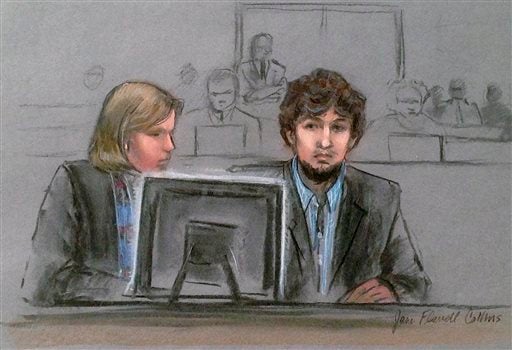 In this courtroom sketch, Dzhokhar Tsarnaev, right, and defense attorney Judy Clarke are depicted watching evidence displayed on a monitor during his federal death penalty trial Monday, March 9, 2015, in Boston. Tsarnaev is charged with conspiring with his brother to place two bombs near the marathon finish line in April 2013, killing three and injuring 260 spectators. AP

Here’s a look at some of the most compelling moments in the government’s case against Boston Marathon bomber Dzhokhar Tsarnaev, convicted Wednesday of all 30 federal counts against him:

Tsarnaev’s lawyer, Judy Clarke, startled a packed courtroom when she bluntly admitted during opening statements, “It was him.” In a strategy designed to save him from the death penalty, Clarke told the jury that Tsarnaev had fallen under the malevolent influence of his now-dead older brother, Tamerlan, who she said had become radicalized and drew his brother into his plan to bomb the marathon.

But prosecutor William Weinreb said the two brothers were equal partners in a plan to “tear people apart and create a bloody spectacle” to retaliate against the U.S. for its wars in Muslim lands. The Tsarnaevs — ethnic Chechens — moved to the U.S. from Russia more than a decade before the bombings.

People who lost limbs in the explosions delivered heart-wrenching testimony about the moments after the explosions. Rebekah Gregory said she looked down at her leg: “My bones were literally laying next to me on the sidewalk and blood was everywhere. … At that point, I thought that was the day I would die.”

Bill Richard, the father of 8-year-old Martin Richard, who was killed in the second explosion, described making the agonizing decision to leave his mortally wounded son with his wife so he could get help for his 6-year-old daughter, whose leg had been blown off. “I saw a little boy who had his body severely damaged by an explosion, and I just knew from what I saw that there was no chance,” Richard said.

Jeff Bauman, who lost both legs in the attack, recalled locking eyes with Tamerlan Tsarnaev just before the first bomb exploded. “He was alone. He wasn’t watching the race,” Bauman said. Bauman, who gave the FBI a description of Tamerlan from his hospital bed, became a symbol of the attack when he was captured in an Associated Press photograph as he was wheeled away from the bombing scene, ashen-faced and holding onto his ravaged legs.

Jurors were taken to see the boat Dzhokhar Tsarnaev was captured hiding in four days after the bombings. On the inside walls of the boat, Tsarnaev wrote and carved a note denouncing the U.S. for its actions in Muslim lands. “Stop killing our innocent people and we will stop,” he wrote. Jurors also saw more than 100 bullet holes on the sides of the boat, which was fired at by police before Tsarnaev was captured.

An FBI agent showed jurors the white cap Tsarnaev wore during the attack. In video and still photos released by the FBI three days after the bombings, Tsarnaev was seen wearing a white cap backward. The FBI referred to him as “White Hat” until they learned his identity.

The killing of a police officer

Jurors heard the frantic radio call made by a Massachusetts Institute of Technology police officer who found fellow Officer Sean Collier mortally wounded in his cruiser. “Officer down! Officer down! … Get on it!” the officer yelled. A medical examiner testified that Collier, 26, was shot three times in the head, including one shot between the eyes. Tsarnaev’s lawyer said it was Tamerlan who shot Collier. An MIT graduate student who was riding his bike by the scene around the time of the shooting identified Dzhokhar as the man he saw leaning into Collier’s cruiser.

Dun Meng testified about a harrowing ride he had with the Tsarnaev brothers the night of April 18, 2013, hours after the FBI publicly released photos of the two men as suspects in the bombings. Meng said he pulled his car to the side of the road to respond to a text message when suddenly a man jumped in, pointed a gun at him and told him to drive. Meng said the man — Tamerlan Tsarnaev — told him he had committed the Boston Marathon bombings. Meng testified that Dzhokhar Tsarnaev later joined them in the car, took his bank card and withdrew $800 from a cash machine in suburban Watertown. Meng said he jumped from the car when the brothers stopped to get gas and ran across the street to another gas station. Jurors saw surveillance video of a terrified Meng begging the clerk to call police.

Prosecutor Aloke Chakravarty closed the government’s case by insisting that what the younger Tsarnaev did “was a cold, calculated terrorist act.” ”This was intentional. It was bloodthirsty. It was to make a point,” he said. “It was to tell America that ‘We will not be terrorized by you anymore. We will terrorize you.'”

Defense attorney Judy Clarke countered by arguing, as she did at the trial’s outset, that Tsarnaev took part in the attack but did so under older borther Tamerlan’s malevolent influence. Clarke repeatedly referred to Dzhokhar Tsarnaev — then 19 — as a “kid” and a “teenager.”

“If not for Tamerlan, it would not have happened,” she said.

Read Next
Aquino to honor bravery of Filipino soldiers
EDITORS' PICK
COVID-19 cases may peak by October — DOH
Welcome the next imagery master with vivo X70 co-engineered with Zeiss
Declaration of Pacquiao as PDP-Laban presidential bet illegal — Cusi wing
An innovative, fun shopping experience AllDay
97 areas in PH under Alert Level 4 — DOH
Watch live performances by ITZY, Mamamoo and other K-pop stars on Smart’s GigaPlay App
MOST READ
Roque not surprised by opposition to ILC nomination: They do not wish anyone to succeed
Son of prominent businessman nabbed in La Union for cocaine possession
Declaration of Pacquiao as PDP-Laban presidential bet illegal — Cusi wing
Drilon wants income tax records of Pharmally execs with luxury cars
Don't miss out on the latest news and information.