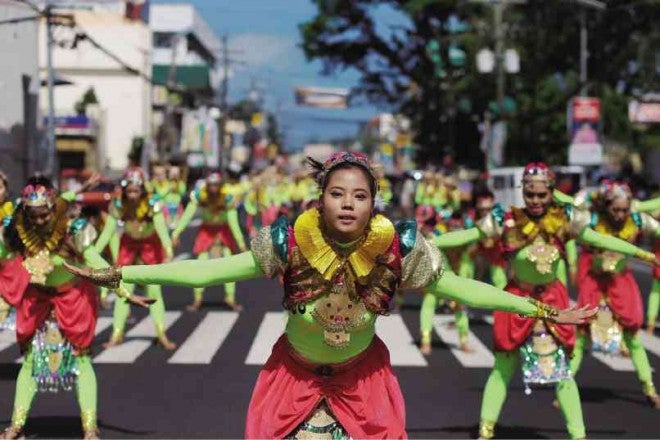 FESTIVAL OF FESTIVALS Street dancers perform during the opening of the monthlong Magayon Festival in Albay province in Legazpi City. PHOTOS BY MARK ALVIC ESPLANA

A KALEIDOSCOPE of color, pageantry, rituals rich in symbols, mythological characters from ancient Bicol, and history, culture and religion during Hispanic times—all these Albay offers in its Daragang Magayon Festival this month.

The yearly event, which has been helping promote tourism and trade in the province, opened on Monday right after Easter Sunday. Now on its 16th staging, it features a monthlong calendar, packed full of activities until May 5.

Gov. Joey Salceda said the activities would move from the mythological, showcasing Albay’s myth and legends, to the Hispanic past “highlighted by costumes, dances and songs that are uniquely Albayano with touches of that Iberian heritage.”

Abdon Balde, provincial tourism consultant, said the Spanish colonial period would also be showcased by street and culinary presentations in April, a month widely held as a peak tourist season for the province.

“Albay was one of the richest areas in the country, next only to Manila and Cebu, relatively due to an economic boom that rode on the success of the abaca and coconut industry,” Salceda said of the 329 years of the province during the Spanish era.

Aside from European culture, the Spaniards brought Christianity to the towns by erecting churches, spurred the economy by building galleons, and engaged in massive infrastructure works, among them by Jose Ma. Peñaranda in 1854.

Dorothy Colle, provincial tourism chief, said a hundred events were lined up during the festival, including seven centerpiece presentations.

Twenty-nine creatures over 10-foot tall represented local mythological characters made of papier-mâché and developed by local artists, joined the Higantes parade on Tuesday, covering a 3-kilometer stretch of Rizal Street, the main thoroughfare, from the Trilon Monument at the Legazpi Port District to Peñaranda Park in Albay District.

According to the provincial tourism office, the slew of characters involved “Gugurang” (wise old men) and others representing the “able, streetwise, strong, virile and brave Bikolano;” “Mayon,” a beautiful woman, “intelligent but proud, hardheaded and moody”; heroes in the Bicol epic Ibalong “Baltog,” “Handiong” and “Bantong”; Tambaloslos, a creature with “wide protruding lips covering its face when it laughs and loose-bagged testicles dangling to the ground.”

Balde said the creatures were culled from the book “The Brief Account of Beliefs, Legends, Superstitions and Religion of the Ancient Indios of Bicol” by Fray Jose Castaño, published in 1885 in Madrid.