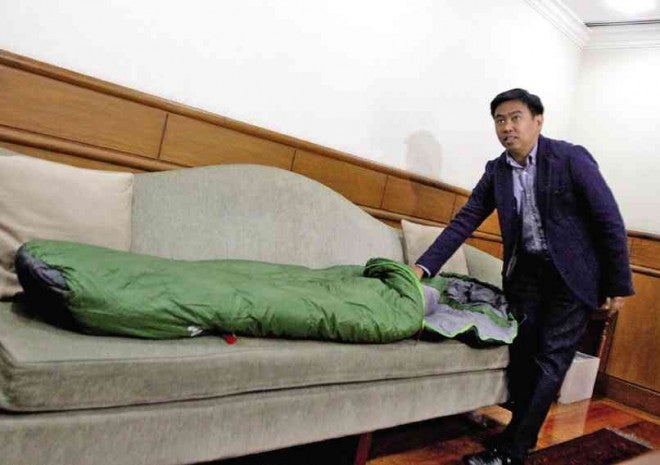 SLEEPOVER’S OVER In this March 12 photo, Makati City Mayor Jejomar Erwin Binay Jr. shows the “bed” he would use while staying in his office in defiance of the Ombudsman’s six-month suspension order. INQUIRER FILE PHOTO

Saying he had endured spending 28 days straight at his 21st floor office, embattled Makati City Mayor Jejomar Erwin Binay Jr. finally went home shortly after winning another round at the Court of Appeals (CA) and staving off the suspension order issued by the Office of the Ombudsman.

The 37-year-old mayor and son of Vice President Jejomar Binay left for his Barangay San Antonio residence around 9 p.m. on Monday, hours after the CA granted his petition for a preliminary injunction and ordered the Ombudsman and Department of the Interior and Local Government (DILG) to respect its earlier ruling stopping the suspension order.

When Binay started defying the March 11 suspension order by refusing to vacate his office, the widower and father of four told the media that he would be sleeping on the office couch. His spokesperson, Joey Salgado, recently said he didn’t leave the office even during the Holy Week break.

In a press conference at City Hall on Tuesday, a smiling Binay said he was finally able to have dinner with his children and “we stayed up until 1 a.m. just having a chat.”

Binay thanked the CA for finding merit in his case, as well as constituents who had rallied behind him. Around 2,000 to 3,000 local government employees and pro-Binay residents occupied City Hall grounds for days as a show of their support.

The mayor also called on the Ombudsman, the DILG and Vice Mayor Romulo Peña—who had taken his oath as acting mayor and set up an office in that capacity at the old city hall building—to respect the CA ruling.

He called on Peña to “go back to work” as vice mayor and sign the payroll of some 150 employees whose salaries had been delayed because of the political impasse.

“The CA clearly said in the ruling that I was never suspended and that there was nobody who replaced me as head of the city,” he added.

Peña didn’t show up at his makeshift office on Tuesday. When reached on the phone, he said he had to attend a series of meetings elsewhere.

He declined to comment on the latest CA ruling favoring Binay, saying he would wait for the Ombudsman and DILG’s next move. He maintained he was just following “protocol.”

In the press conference, Binay also asked the National Capital Region Police Office (NCRPO) and the Southern Police District (SPD) to pull out the estimated 100 policemen still posted at the old city hall.

“We are trying to avoid confrontation and additional tension here. It is unnecessary at this point but we will have to invoke the authority of the city government over its facilities which they are using without permission,” he added.

But the Philippine National Police (PNP) said there would no pullout for now.

“Knowing that the situation is very tense, the PNP’s mandate is to keep the peace between the two (Binay and Peña) camps. The PNP is in the area for peacekeeping, nothing else,” the PNP spokesperson, Chief Supt. Generoso Cerbo Jr., said in a press briefing in Camp Crame on Tuesday. With a report from Julie M. Aurelio