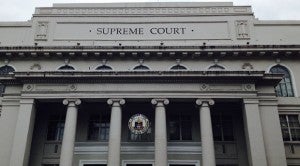 The Supreme Court has set for oral argument the petition of Ombudsman Conchita Carpio-Morales to nullify the temporary restraining order (TRO) of the Court of Appeals stopping the implementation of the six-month suspension of Makati Mayor Jejomar Erwin “Junjun” Binay.

Proceedings were set for April 14 in Baguio City.

Carpio-Morales, in her petition said the appeals court Sixth Division committed grave abuse of discretion in issuing two resolutions: (1) one pertaining to the TRO, dated March 16, on Binay’s six-month preventive suspension; and (2) the other dated March 20 directing the Ombudsman to file her comment on Binay’s plea to cite her in contempt for defying the restraining order.

She explained that the preventive suspension was issued to prevent him from interfering with the ongoing investigation on alleged anomalies in Makati City.

“In this case, respondent Binay was placed under preventive suspension pending the resolution of the administrative complaints against him (but not to exceed six months) for good reason – the cases involve anomalies in the procurement and payment for the Parking Building of the Makati City Hall. Needless to state, practically all the documentary evidence relevant to the case are in the custody of the city government, in the same way that potential witnesses – whether friendly or adverse – are currently in the City’s employ. There is, therefore, an imperative need to guard such evidence and witnesses against possible tampering and intimidation; hence, the preventive suspension against respondent Binay and his co-respondents, who are likewise incumbent officials of the city government,” the petition stated.

“Without doubt, therefore, the preventive suspension imposed by the Office of the Ombudsman on respondent Binay is not only permissible under the law but necessary given the prevailing circumstances of the case. The Suspension Order was dictated by prudence and the need to preserve the integrity of the ongoing administrative adjudication,” Carpio-Morales added.

She said the TRO issued by the CA, in effect, was delaying and interfering with the ongoing administrative cases against Binay “and worse, compromise the pending proceedings by granting him continued access to evidence and witnesses that bear heavily on the resolution of his case.”

“Respondent Court of Appeals cannot substitute the Office of the Ombudsman’s judgment for its own,” the petition further stated.

It added that in issuing the restraining order, the Court of Appeals “gravely abused its discretion and wantonly ignored the independence and mandate of the Office of the Ombudsman.”

Binay was suspended for six months after the Ombudsman fact-finding team recommended that he and several others were slapped with a case for violation of the anti-graft law and malversation in connection with the allegedly overpriced parking building.

Binay went to the Court of Appeals and asked to stop the implementation of the suspension order.

The appeals court issued a TRO but the Department of Interior and Local Government (DILG) and the Office of the Ombudsman defied the restraining order saying it was already moot and academic because the suspension order had been served.

On Monday, the appeals court granted the writ of preliminary investigation in favor of Binay.