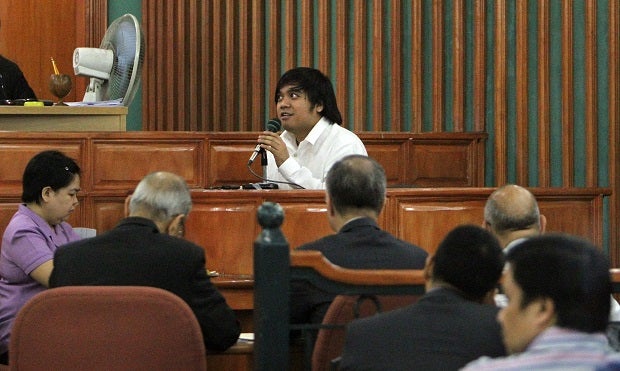 A whistle-blower in the P10-billion pork barrel scam has again been chided by the Sandiganbayan for giving different versions of her testimony in relation to the alleged “secret transactions” with some of primary state witness Benhur Luy with some lawmakers.

Returning to the witness stand during the bail hearing of detained Sen. Jinggoy Estrada, witness Merlina Suñas confirmed that Luy used one of the bogus foundations of alleged scam mastermind Janet Lim-Napoles without the latter’s knowledge.

Suñas told the antigraft court’s Fifth Division that Luy had asked her sometime in 2012 to allow him to use the People’s Organization for Progress and Development Foundation Inc. (POPDFI), a Napoles-controlled foundation which listed Suñas as its president, to implement a government-funded project.

Cross-examined by Napoles’ lawyer, Lani David, Suñas said Luy informed her that Pauline Labayen, Estrada’s former deputy chief of staff and a coaccused in the P184-million plunder case against the senator, was helping him in facilitating his “own” transaction.

The witness said Luy even sought her help in opening a bank account for POPDFI at the Makati branch of Maybank and in securing two board resolutions authorizing a certain Ma. Flor Villanueva to receive and encash checks in behalf of the foundation.

Napoles has claimed that Villanueva was Luy’s “personal secretary” in getting projects funded by the pork barrel, or Priority Development Assistance Fund (PDAF), of some unnamed lawmakers.

When David asked her if she received money in exchange for the assistance she gave to Luy, Suñas said: “I cannot recall.”

David again asked Suñas if Luy gave her any cash while reminding the witness that she had already testified in the Sandiganbayan Third Division regarding the matter.

The lawyer said that, in her testimony in the Third Division, Suñas admitted to receiving P50,000 from Luy after she helped him use the name of POPDFI in one of his pork barrel transactions.

The Third Division justices had admonished Suñas for several inconsistencies in her testimony and even noted that she had “selective memory” and “partial amnesia.”

Special state prosecutor Jacinto de la Cruz tried to block David’s questioning, pointing out that the case being heard in the Third Division involved the plunder case of detained Sen. Juan Ponce Enrile and not Estrada’s.

David told the justices that the defense was trying to impeach the credibility of Suñas who, she said, was telling a different story before the Fifth Division.

David read in open court the transcript of Suñas’ testimony before the Third Division at the May 20 hearing of Napoles’ bail petition in which Suñas admitted that she had indeed received P50,000 in cash from Luy after she opened a new account for POPDFI.

“Are you now changing your answer?” David asked Suñas.

“I did not say that I did not receive P50,000. What I said was I cannot recall receiving money from Benhur Luy,” Suñas said, drawing laughter from Estrada and other people inside the courtroom.

Suñas said she did not deny getting a hefty sum from Luy, but maintained it happened only once.

Speaking with reporters after the proceedings, Estrada accused Suñas of having “selective memory” in providing details of her involvement in the PDAF scam.

“You yourselves heard what the witness said. She has been changing her testimony. She gave different answers in the Third Division and here in the Fifth Division,” he said.

“I think the witness that they (prosecution) just presented is really incredible (sic),” Estrada said.

“It’s now becoming clearer that they falsified and forged the signatures of those allegedly involved,” he said.