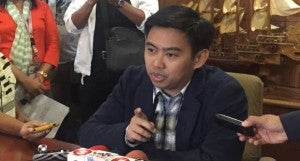 MANILA, Philippines – The Court of Appeals issued on Monday a writ of preliminary injunction stopping the Office of the Ombudsman, the Department of Justice and the Department of Interior and Local Governments from enforcing the preventive suspension of Makati Mayor Jejomar Erwin “Junjun” Binay in connection with an administrative case.

The appellate court’s 6th Division ordered Mayor Binay to post a P500,000 bond and asked all government agencies concerned to respect and preserve the status quo before the suspension order was issued.

This means that the Ombudsman, the DOJ and the DILG have been instructed by the Court of Appeals to let Binay stay in office pending the review of the administrative case against him and all the legal issues raised regarding his suspension order.

The Ombudsman ordered the six-month preventive suspension of Binay and 21 other officials of the Makati City government in connection with an administrative case over the allegedly overpriced construction of the Makati City Hall II Building. SFM/AC