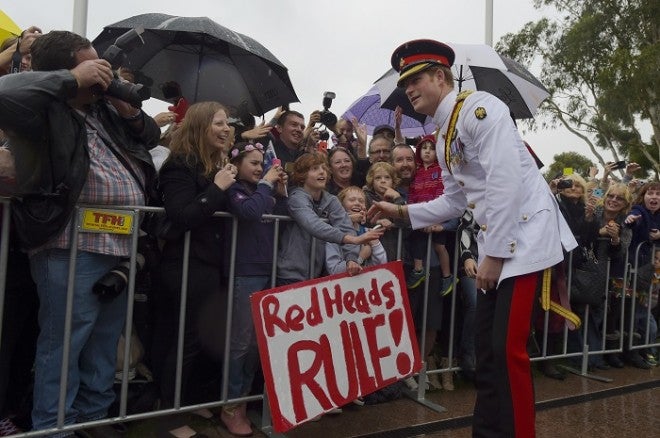 Britain’s Prince Harry, center right, laughs with fellow red heads as he meets members of the public during a visit to the Australian War Memorial in Canberra, Australia, Monday, April 6, 2015. Prince Harry, or Captain Harry Wales as he is known in the British Army, will end his military career with a month long assignment with the Australian Defense Force in barracks in Sydney, Perth and Darwin. AP

CANBERRA, Australia — Britain’s Prince Harry joked and chatted with an enthusiastic crowd Monday at his only scheduled public appearance during a monthlong embedment with Australia’s army, declaring pride in his ginger hair and telling a self-obsessed younger generation that “selfies are bad.”

The British army captain reported for duty in Australia’s capital, Canberra, to begin a four-week attachment to the Australian army that will take him to the east, west and north coasts of the vast nation.

But before he got down to military business, Harry ignored light rain and cool weather to shake hands and chat with hundreds of cheering well-wishers who gathered at cordons to welcome him outside the Australian War Memorial.

Perhaps because of his own history of embarrassing candid photos, he was less generous with teenagers who wanted to photograph themselves with him. He drew laughs when he urged one teen admirer to break the habit of taking “selfies.”

“No, I hate selfies. Seriously, you need to get out of it,” Ten Network television recorded him telling the admirer.

Harry, fourth in line to the British throne — he’ll move to fifth when brother Prince William’s second child is born — also shook hands and gave a high-five to ginger-haired 12-year-old Ethan Toscan, who brought a banner that read “Redheads RULE!”

Like in Britain, redheads are often teased in Australia, where they are known as “rangas” — short for orangutans.

“He said that I was fabulous in making the sign and it’s awesome to be a redhead,” Ethan said later.

Young and old members of the public gathered at the memorial, with Harry laying a wreath at the Tomb of the Unknown Soldier before strolling to the museum’s World War I and Afghanistan galleries.

Harry arrived at Sydney International Airport early Monday dressed in army fatigues, and changed into a dress uniform for the official functions at the memorial.

Harry saluted his new boss, then delivered a letter from him his grandmother Queen Elizabeth II. She wrote that it was appropriate that her second grandson visited as the two countries commemorated sacrifices made a century ago during World War I.

Captain Harry Wales, as he is known in the British army, will be embedded with a number of Australian army units and regiments in the cities of Darwin, Sydney and Perth.

Media reported that Harry made the 3,100-kilometer (1,900-mile) flight from Canberra to the northern city of Darwin in an Australian air force jet late Monday. The Defense Department would not confirm the reports, saying it did not comment on individual soldiers’ movements.

In Darwin, which will become a training hub for 1,050 U.S. Marines in the coming weeks, Harry will work with a predominantly Aboriginal infantry regiment, the North-West Mobile Force, known as NORFORCE.

Harry, an Apache helicopter pilot, will be attached to an aviation squadron in the east coast city of Sydney and work with the elite Special Air Service Regiment, including Afghanistan veterans, in the west coast city of Perth. He’ll have to pass Australian certification testing before he’s allowed to pilot any Australian aircraft.

He and his father, Prince Charles, will also attend centenary commemorations on April 25 in Turkey of the ill-fated invasion of Gallipoli peninsula during World War I in which Commonwealth forces under British command, including a joint Australian and New Zealand army, suffered heavy casualties.

Read Next
Allies to stop ‘grandstanding’ lawmakers during Mamasapano probe
EDITORS' PICK
Over 3 Million worth of prizes to be won at Smart Padala’s SENDali Manalo Promo!
Gear up and get ready to play with Yamaha Mio Gear
Acer starts the year off strong with the Aspire Vero National Geographic Edition
If elected VP, Sara Duterte will push for mandatory military service for all Filipinos
Senate bill seeks to penalize employers requiring employees to work during rest hours
Marcos-era elections: Not what his son signed up for
MOST READ
‘Sampal sa gobyerno:’ Drilon wants unvaxxed PAO chief barred from working
Vice mayor slams Vico Sotto for turning Pasig into a ‘puro palabas’ city
Bongbong-Sara tandem names 7 candidates in initial senatorial slate
Jose Manalo’s son Benj pays tribute to late mother: ‘You’re a testimony of God’s love’
Don't miss out on the latest news and information.