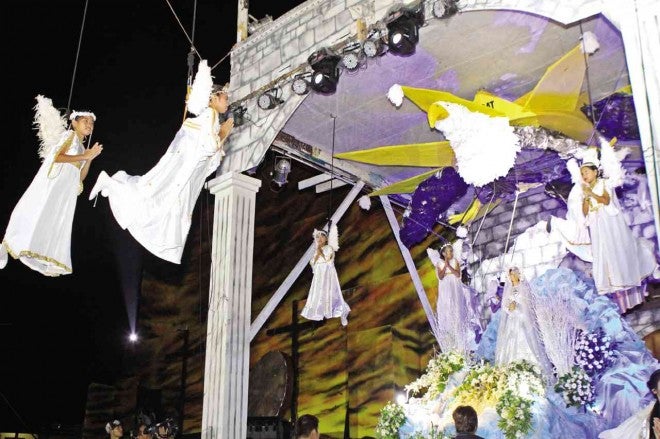 CHILDREN play the role of angels during the Sugat-Kabanhawan 2015 in Minglanilla Central School Ward 1 in Cebu province. LITO TECSON/CDN

CEBU CITY—The centuries-old tradition that has made Minglanilla town in southern Cebu famous has gone back to its roots.

Church officials and residents of Minglanilla have reverted to the traditional way of celebrating Sugat sa Minglanilla, or the reenactment of the meeting of the risen Christ and the Virgin Mary on Easter Sunday morning.

“Sugat” is a Cebuano word for meeting.

For the first time in 20 years, the Mass that followed the reenactment was held inside the Archdiocesan Shrine of the Immaculate Heart of Mary instead of the sports complex.

There were no more discos at the sports complex which had usually preceded the reenactment for over a decade but had resulted in a number of drunken youths who misbehaved and were unruly.

“We have seen so much undesirable and immoral acts which divert the spirit of the celebration,” said Fr. Arnie Visitacion, worship committee chair of the Archdiocesan Shrine of the Immaculate Heart of Mary.

The matter was brought to the attention of Cebu Archbishop Jose Palma who oversees how religious celebrations in the archdiocese are conducted.

With the help of several parishioners, the archdiocese was able to convince Minglanilla officials to ban the usual disco and to hold the Easter Mass inside the church.

“The usual grand staging of the Sugat was still there. But we had to go back to the traditional way, according to the norms and guidelines of the Church. In doing so, we were able to draw people’s attention to what the celebration is really about,” Visitacion said.

The Sugat sa Minglanilla was introduced by the Spaniards as a religious activity back in 1889 to celebrate Easter Sunday.

The Minglanilla folk would then slaughter carabaos equivalent to the number of children who played the role of angels in the Sugat presentation.

The practice was stopped when the number of carabaos dwindled.

Years later, the Sugat sa Minglanilla transformed into a major tourism attraction because of its elaborate production that earned the town the title “Sugat Capital of the South.”

Little girls in costumes as angels hang from body harnesses.

In 2000, the Sugat staging was moved from the church grounds to the town’s public school and later to the sports complex due to the increasing number of people who trooped to Minglanilla to witness the event.

In 2005, the Kabanhawan Festival was introduced to add color to the celebration.

Msgr. Esteban Binghay, Minglanilla parish priest from 1987 to 1998, said the religious aspect of the celebration slowly dwindled when the discos and other cultural presentations were introduced.

“People could no longer pray. There were more distractions than meditations,” said Binghay, episcopal vicar of Metro Cebu South district of the Archdiocese of Cebu and the rector of the Theotokos Shrine in Carcar.

This year, the Sugat started with a drama depicting the passion and death of Jesus at 2 a.m. on April 5.

There was a fight scene between Archangel Michael and Lucifer, represented as dark eagle, before the reenactment of the meeting of risen Christ Jesus and the Virgin Mary.

One of the angels, hanging from a harness, removed the Virgin Mary’s black veil to symbolically extol the joy of the Easter season.

Then a 300-meter procession brought the images of the Risen Christ and the Blessed Virgin Mary from the sports complex to the church in Minglanilla.

In the afternoon of Easter Sunday, seven contingents from different public schools in Minglanilla competed in historical, cultural and heritage-themed dance presentations.

Carabao racing and Easter egg hunting were also among the highlights of the celebration.

Minglanilla Mayor Elanito Peña said at least P3 million was allocated for the festival. “The amount included all expenses from costumes to props, fireworks and all,” he said.