MANILA, Philippines – With its support for and belief in press freedom as strong as ever, Malacañang has vowed to push for the passage of the long-awaited freedom of information (FOI) bill in 2015, one year before President Benigno Aquino III completes his term and five years after he promised to push it in Congress. 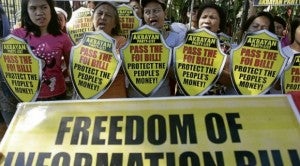 For Communications Secretary Herminio Coloma, the life of every journalist is also very important.

“The government wishes to give us assurance of protection for press freedom,” he told the weekly “Pilipinas, Pilipinas” public affairs program over the state-run Radyo ng Bayan.

That is why the administration has been “doing its best to maintain an environment that protects journalists and their rights,” according to Coloma.

“In cases of media killings and other acts of violence against journalists, the government promptly acts on them to seek justice for the victims,” he emphasized.

However, the head of the Presidential Communications Operations Office did not endorse the call of Gary Pruitt, president and CEO of the Associated Press, for changes in international laws that would make it a war crime to kill journalists or take them hostage.

The proposal, he said, would need serious study.

But he assured the public of the Palace’s readiness “to support measures that aim to provide professional and legitimate journalists a higher level of protection” as they continue to make the Philippine press one of the freest in Asia, if not the world.

Coloma, however, did not give details.

Last week, Pruitt said a new framework would have to be done to protect journalists covering conflicts in which they have been increasingly seen as targets by extremist groups.

“It used to be that when media wore PRESS emblazoned on their vest, or PRESS or MEDIA was on their vehicle, it gave them a degree of protection” because reporters were seen as independent civilians telling the story of the conflict,” he said.

“But guess what? That labeling now is more likely to make them a target,” he said in a speech at the Hong Kong’s Correspondents Club.

Pruitt stressed the need to update existing international laws to protect journalists. He proposed creating a new protocol to the Geneva Conventions to make the killing of a journalist a specific war crime. He also suggested the adoption of articles of the International Criminal Court, which dealt with war crimes, to specifically cover journalists.

While admitting that these measures would not necessarily prevent journalists from getting killed, he asserted it would raise awareness of the idea that media workers, like doctors and nurses, should not be targeted during war. SFM/AC