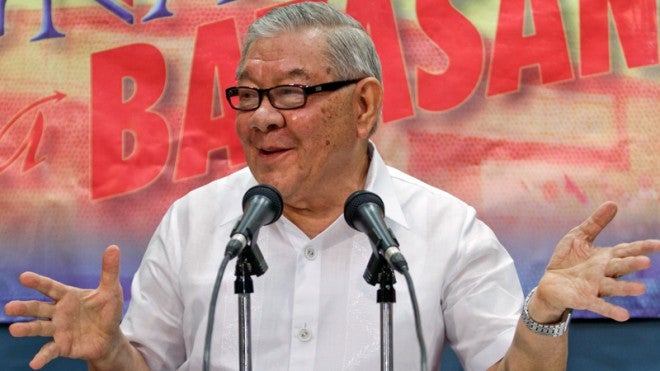 Speaker Feliciano Belmonte Jr. has urged President Aquino to fill the vacancies at the top of the Commission on Elections (Comelec) in order to provide direction and stability to the poll agency amid fears of a return to manual elections or a postponement of the 2016 elections.

“I call on the President to fill the vacancies so [the] Comelec can function normally in this political climate,” said Belmonte in a text message.

“This will provide direction, stability and a sense of permanence so the Comelec can have more clout on all matters,” Belmonte added.

With only four commissioners, including an acting chair, the poll body has been hamstrung by the heavy work load and the rising number of legal obstacles in its preparations for the May 2016 elections.

Former Chair Sixto Brillantes Jr. and two other commissioners—Lucenito Tagle and Elias Yusoph—retired two months ago but the President has yet to name their replacements.

Brillantes’ last act in office—the awarding of a P269-million contract to Smartmatic-TIM to refurbish 81,000 vote counting machines—has been blocked by a temporary restraining order (TRO) from the Supreme Court.

The fate of the 81,000 precinct count optical scan (PCOS) machines will determine whether the Comelec will go back to manual counting in the May 2016 elections.

Acting Comelec Chair Christopher Lim raised two possible scenarios arising from the delay in setting up a PCOS network in the next 13 months—a return to manual elections or a postponement of the elections.

But Belmonte and other House leaders said Congress would not agree to a return to manual elections. “I am certainly against manual,” Belmonte said.

Caloocan Rep. Edgar Erice, vice chair of the committee on suffrage and electoral reforms, said the Supreme Court decision stopping the Smartmatic contract would have an adverse impact on the coming elections.

“The law requires automated elections. If the SC will not act on it ASAP, there will be no more time for its preparation and it may result either in manual elections or postponed elections,” said Erice.

But a return to manual elections or a postponement would require an amendment to the Election Law, he said.

“A return to manual elections by the SC in effect will be a judicial legislation and may result in a constitutional crisis,” said Erice.

Deputy Speaker Giorgidi Aggabao said the Comelec had become a “mess” and the public was right to be alarmed.

He said that after the high court’s TRO, the Comelec flip-flopped on its decision to disqualify Smartmatic from bidding to supply 23,000 vote-counting machines.

“That hardly inspires confidence that the coming elections would be automated. Manual elections would not be illegal but it is certainly a push back. I think most people would eschew manual elections. They know perfectly well that manual counting is opaque… with dodgy results,” said Aggabao.