Good Friday crucifixions for Filipinos only 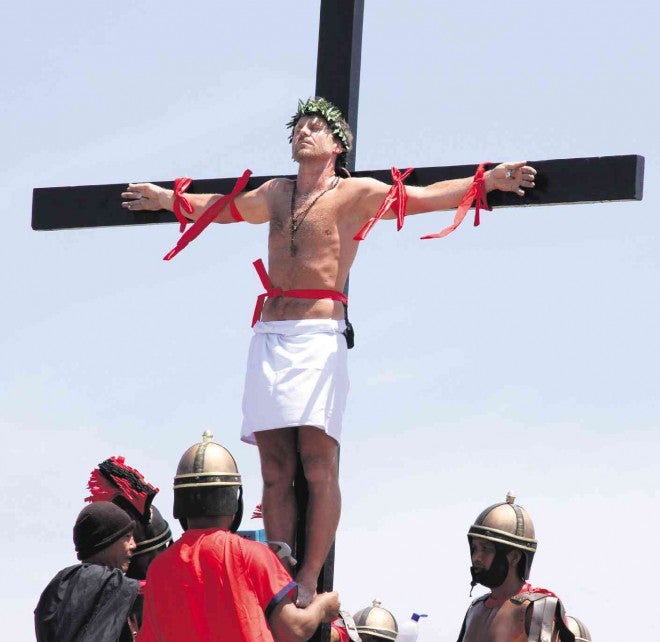 NO ROLE PLAYING Danish filmmaker Lasse Spang Olsen steals the limelight after being nailed to the cross in Barangay San Pedro Cutud in San Fernando, Pampanga province, on Good Friday in 2014. Olsen, 49, could be the last foreign national to take part in the reenactment of the crucifixion of Christ after local officials banned foreigners from participating in the annual Holy Week rites. E.I. REYMOND T. OREJAS/ CONTRIBUTOR

CITY OF SAN FERNANDO—For the safety of everyone, city officials are making Good Friday crucifixions in three villages here a strictly Filipino affair—and for true penitents only.

Councilor Harvey Quiwa, cochair of the Malelo (Holy Week) 2015 Committee, said on Monday that a ban on the crucifixion of foreigners covered the neighboring villages of San Pedro Cutud, Santa Lucia and San Juan.

The crucifixion of foreigners was also prohibited last year, but Danish filmmaker Lasse Spang Olsen managed to join 11 Filipino men who had themselves nailed to crosses in the annual rites for the atonement of sins, seeking favors from God and giving thanks for answered prayers.

The village council of San Pedro Cutud allowed Olsen to join the rites after he claimed that he had been converted to Roman Catholicism.

Local officials said the ban on foreign participation had been prompted by the disrespect for the local Lenten tradition shown by some foreigners.

In 2008, a Briton made a scene before backing out at the last minute, they said.

Once, a Japanese man used the footage of his crucifixion as an insert in a pornographic film, they said.