MANILA, Philippines – The Air Force received on Monday the first of three Airbus C295 medium-lift transport aircraft as the Philippines continued modernizing its military which is one of the weakest in Asia.

“The Philippine Air Force is fortunate to have in its inventory the first of this type of aircraft that would certainly boost its transport and mobility capability in the movement through air of personnel and their equipment and supplies,” Gazmin said in his speech at the plane’s turnover ceremonies in Villamor Airbase.

“We have to persevere and be contented with what we can afford based on the priorities of our urgent operational needs and their financial affordability. Necessarily, we have to take small but definite and useful tips towards practical modernity,” he said. 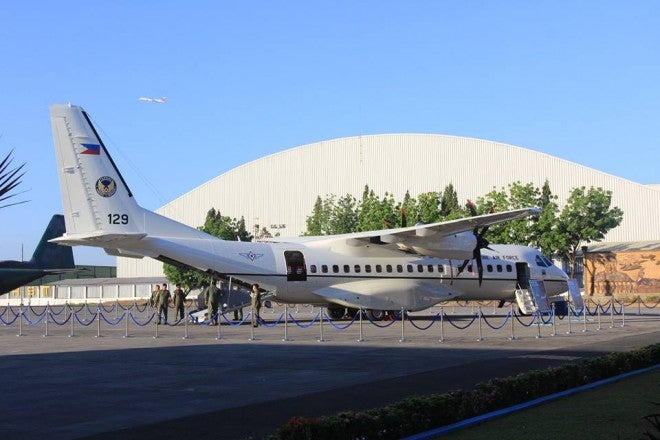 Captain Geraldine Matienzo, one of the four pilots of the C295 and the only female pilot, described the new plane as “modern” for its glass cockpit and LCD features.

“It’s very modern, digital, but the concept of flying is the same any pilot can study it,” she told reporters.

She said everyone was happy with the latest acquisition.

“It’s like having a new car for all of us. Everybody is very happy to have this new equipment,” she added.

Despite not having the modern air assets, Matienzo said they were able to perform their missions but the new aircraft will enhance their capability.

More pilots will be trained for the C295. Matienzo, the lone female pilot from the first batch, said they were chosen based on qualifications.

“As a female pilot, we were chosen based on our qualifications. It didn’t matter if you are male or female,” she said.

The C295 will be maintained by the 220th Airlift Wing of the Air Force.

The plane, which can augment the C-130 cargo planes, can carry as many as 71 passengers, 50 paratroops, 24 stretchers with 5 to 7 attendants or up to about 20,000 pounds of cargo. It is capable of landing on and takeoff from short runways.

Some of the brand new aircraft of the Air Force include eight Sokol choppers bought in 2012 and 18 SF-260 trainer planes purchased in 2010.

The Philippines has been trying to modernize its armed forces amid China’s aggressiveness over disputed territory in the South China Sea (West Philippine Sea). AU