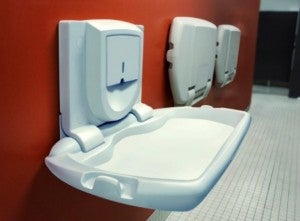 MANILA, Philippines – Senator Miriam Defensor- Santiago has filed a bill mandating all major establishments and government offices to provide a baby diaper-changing table or station in its restrooms or in a common area accessible to both women and men.

In filing Senate bill 2704, Santiago noted that most establishments did not have diaper-changing tables “while those that do have their diaper-changing stations located in women’s restroom only.”

“First, an absence of changing tables results in parents having to change their children’s diapers on the sink of a public restroom. This is unhygienic and also inconvenient for other users of the public restroom,” she said in explaining her proposed measure.

‘Men should be involved’

“Second, to have changing tables located in only in female restrooms assumes that only women have the responsibility to care for children and change their diapers. It fails to consider that even men are or should be involved in taking care of children,” she further said.

“This does not apply to an industrial building or to a nightclub or bar that does not permit anyone who is under 18 years of age to enter the premises. This section also does not apply to a restroom located in a health facially if the restroom is intended for the use of one patient or resident at a time,” it said.

Meanwhile, all local and national government offices, agencies as well as government owned and controlled corporations are covered by the bill.

Major establishments that fail to comply with the provisions of the proposed measure one year after its enactment should be meted with a warning.

And those that fail to comply with it six months after being issued a warning, should pay P2,000 for every succeeding month until compliance is made, the bill further said.