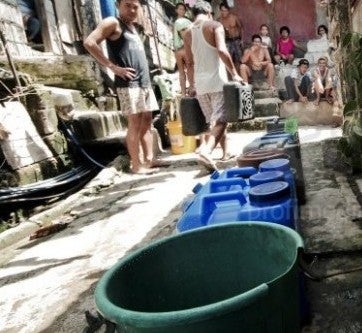 CUSTOMERS of Maynilad Water Services Inc. in some parts of the cities of Pasay, Las Piñas, Parañaque as well as Cavite should expect service interruptions of 14 hours to 28 hours from Tuesday to Friday.

According to a Maynilad  statement, a flood control project of the Department of Public Works and Highways (DPWH) will cause rotating service interruptions from March 31 to April 3.

“Designed to address the perennial flooding in Manila, the DPWH project involves the construction of an interceptor drainage box culvert (DBC) along Blumentritt Street,” the company said in a statement.

Maynilad explained that the DBC would cross the company’s pipe at the corner of Juan Luna and Hermosa streets. This means that the Maynilad pipe needs to be realigned to allow the DPWH to work on its project.

“(We need) 72 hours to drain, realign and energize its affected water pipe because it is a 2,200-millimeter primary line, about seven feet in diameter,” Maynilad said.

The company said that, in anticipation of the DPWH project, it had previously laid a 1,500-mm (about six feet) bypass line through which water supply would continue to flow during the adjustment to the primary line.

“The DPWH allowed Maynilad to undertake its pipe realignment activity over the Holy Week when fewer customers are expected to be home, to lessen the impact of the service interruptions on water consumers,” it said.

Maynilad has added that around 24 roving water tankers will be on standby to serve areas that will experience prolonged interrupted supply.

Likewise with some parts of Parañaque City, where services in these areas will be interrupted for 28 hours from 2 p.m. of March 31 to 6 p.m. of April 1.

Other affected areas are slated for service interruptions that are scheduled to last for 14 hours or 18 hours.

“To minimize inconvenience, Maynilad is appealing to its customers to store enough water for the duration of the interruption,” Maynilad said. “Those with existing overhead tanks are also advised to clean them first before using them to store water.” SFM/AC