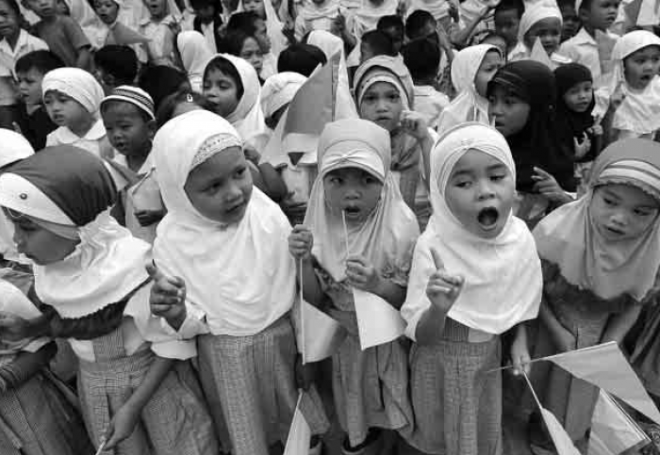 WAY TO PEACE Children of formerMoro rebels at the J. Marquez Elementary School of Peace in Cotabato City are shown the antidote to the culture of war in an institution where peace education is integrated in the curriculum. RAFFY LERMA

COTABATO CITY, Philippines—In a tough slum neighborhood at the edge of the Rio Grande de Mindanao, Christians are teaching the children of former Moro rebels how to get rid of the “culture of war.”

Urban legends abound that feed this outlook in the region that has resisted centuries-old foreign and domestic intrusions from Manila.

The Colt 45 pistol was purportedly designed to comply with US Army requirements during the campaign against the Moros in the early years of the American colonial rule in the Philippines.

Resistance to a firearms collection campaign by then President Ferdinand Marcos following his declaration of martial law in 1972 erupted into a full-blown rebellion in the country’s southern frontier, allegedly because Moros love their guns more than their wives.

Feuding between clans— called rido—over a range of issues from petty slights to a question of honor has cast an often deadly spell of Shakespearean tragedy on the poverty-stricken region.

And then there is the violence inflicted by the forces of nature—the earthquakes, the flooding brought by slight rain and now fierce storms driven by climate change.

The first victims of violence and vendettas are children, according to teachers at J. Marquez Elementary School of Peace.

In 2006, the authorities in the school at Barangay Mother Poblacion decided to include in their academic syllabus practical lessons to help children deal with these problems.

Currently enrolled in the school are 1,760 sons and daughters of rebel returnees who mainly reside in the barangay with a population of over 21,000. All the pupils are Muslim, except for the 11 children of the Christian teachers in the 45-strong faculty.