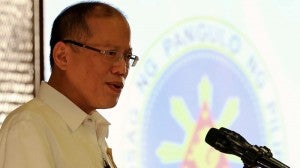 If the Bangsamoro Basic Law (BBL) would be derailed, President Benigno Aquino III said on Friday Filipinos stand to lose more: people caught in conflict, a way to address poverty in Mindanao, and ultimately, a chance to achieve lasting peace.

“If the troubling situation in Mindanao worsens, the wounds would grow deeper, and more persons would resent their condition,” Aquino on Friday said in a national address in Malacañang during the first anniversary of the historic signing of the Comprehensive Agreement on the Bangsamoro (CAB).

The President said that those who are neglected and abused by the system and by institutions would further feel mistreated and suffer more if the BBL won’t pass in Congress.

“This is the crossroads we face: We take pains to forge peace today, or we count body bags tomorrow,” Aquino said.

He assailed the proponents of an all-out war in Mindanao saying that it is easy for them to push for this because Luzon and Visayas are far from the conflict.

“What gain do you see from waging war? Now that we are moving forward as a nation and are on the cusp of success, do they really think that we should advance violence, only to bring us back to the path of hardship?” he said.

According to him, the BBL “is one of the most important proposed bills of his administration,” adding that it would answer two of the most pressing problems: poverty and violence in the country.

“This bill is the product of 17 years of extensive study and negotiations,” he said, noting that the sacrifices of those who have given their lives for the Filipinos “much-desired peace” would be wasted if the BBL won’t be passed in Congress.

READ: Solon: Why not give BBL a chance?

“With the continuation of hearings about the BBL in Congress, each one is given an opportunity to understand the proposed bill,” he said.

The President said he was saddened to see that after only one year, some have seemingly forgotten the hope that everybody felt when the CAB was signed.

“We have replaced it with distrust, unwarranted suspicion, and anger,” he said.

He, however, said that criticisms on the BBL solely stem from a lack of understanding of the bill.

“Should we trust those who say that the peace talks should be ceased, yet offer no other solutions? If we believe these people, where will they take us?” he said.

He maintained that he is not pursuing peace just for the legacy of his administration.

“What we are pursuing is a genuine peace that truly addresses the roots of the problems that led to violence,” he said, citing that the BBL would make this a reality. ID