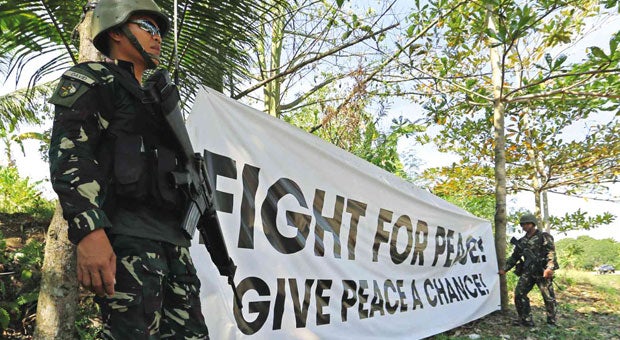 PLEA FOR PEACE The banner at a military checkpoint on the Shariff Aguak-Cotabato City road sums up the appeal of business leaders in Maguindanao province. RAFFY LERMA

COTABATO CITY, Philippines—Muslim physicians, acting as “development catalysts,” are on the front lines of an initiative to breathe new life into a region torn by natural and man-made calamities.

They are called the BDA’s “house doctors”—just like Dr. Mahathir Mohamad, who, as prime minister for 22 years, led the transformation of Malaysia into a progressive and vibrant nation.

The agency, in which the three physicians have played a key role since its inception, was the spearhead of a relief and rehabilitation program contained in a three-pronged ceasefire agreement that the Fidel Ramos administration signed with the MNLF in 1997.

The accord also included the setting up of internationally monitored truce mechanisms and the creation of a juridical entity in a Moro homeland, a more contentious issue that sparked a bloody rebel rampage in 2008 and forced 500,000 people from their homes in Central Mindanao.

The BDA relentlessly focused on building an economic infrastructure, aided, in no small measure, by financial and technical assistance from the World Bank, United Nations Agencies and donor governments, principally Japan, the United States, Australia, New Zealand and the European Union.

“This has had a very big impact on the confidence of the people not only within the communities, but also those coming in from the outside. You will see that physically, there are quite big changes.”

Evidences of an emerging economy are everywhere in Cotabato City. Flashy cars and SUVs (sport utility vehicles) jam downtown streets. Shopping malls and hotels are being constructed. Corrugated iron roofs in renovated houses glisten in the sun in residential neighborhoods. At night, barbecue and beer gardens are crammed.

The Grand Mosque, the largest in the Philippines, draws tourists and large crowds of worshippers on Fridays. The spectacular edifice at the edge of the Tamontaka River, with gold-plated domes and four minarets rising to the sky, was completed in 2011. Sultan Hassanal Bolkiah of Brunei put up 53 percent of its $48-million cost; the rest came from the Philippine government. It is as impressive as those in Istanbul.

A modern, state-of-the-art halal slaughterhouse opened recently, part of preparations for the Asean economic integration at the end of next year and the huge demand for halal products, particularly in Indonesia, Malaysia and Brunei. Technicians are being brought in from Jordan and Japan to train barangays(villages) to work on fisheries and livestock projects the halal way.

A P110-billion Bangsamoro Development Plan on the drawing board is expected to be released next month. It envisions the short-term launching of “quick impact projects.”

“This is something we can immediately implement, if we are given the budget,” Dipatuan said. Partners in the effort, he said, are the Japan International Cooperation Agency, the Philippines’ largest source of official development assistance, and various UN agencies.

Medium- and long-term projects under the plan will be up and running when the proposed Bangsamoro Basic Law (BBL), the charter for the substate envisioned in the framework agreement signed last year, is finally approved in a plebiscite.

An MILF-led Bangsamoro Transitional Authority, whose organization and composition will be outlined in the BBL, will then take over from the Autonomous Region in Muslim Mindanao (ARMM), until elections are called in 2016.

“The downside is if the BBL is not passed, I can just imagine that in the Bangsamoro communities, there will be massive frustrations. There will be demoralization and there is a possibility that we will relapse into violence and protracted conflict,” Dipatuan said. “I am hoping this will not happen, Inshallah.”

The BBL has run into stiff opposition in Congress in the aftermath of the slaughter of 44 Special Action Force (SAF) commandos on Jan. 25 in the cornfields of Mamasapano, 70 kilometers to the southeast on the Shariff Aguak-Cotabato City road. The commandos encountered troops of the MILF, its renegade wing the Bangsamoro Islamic Freedom Fighters (BIFF) and other armed groups after killing Malaysian bomb maker Zulkifli bin Hir, alias “Marwan,” who has a $6-million bounty on his head from the US government. Marwan’s Filipino aide, Basit Usman, escaped and is now the object of air and ground operations launched last month by the Armed Forces of the Philippines.

Described as “anti-BBL,” their faces are plastered on car bumper stickers and streamers.

Not far from the bridge is an Army checkpoint, where an armored personnel carrier was deployed on the roadside bush. Behind the soldiers was a streamer declaring, “Give peace a chance.”

“The BBL now hangs in the balance,” said Juanday, a former BDA executive director. “This is unfair. The BBL has nothing to do with Mamasapano.”

The 64-year-old Juanday, who left the agency in 2009 to go back to his medical practice, remains upbeat that the peace negotiations will bear fruit with Aquino still 14 months into his six-year term.

“I’m not losing hope,” said Juanday, who heads the Metro Chamber Commerce of Cotabato City, in an interview in his clinic. “My assessment is because the President is there, I think the process will continue. It might take a longer time, but this will go on. My fear is that he might be overtaken by events.”

He referred to the current military campaign being waged against Usman and the BIFF.

The third group is saying you cannot get justice except by (taking up) arms, Juanday said.

Young Moros have gravitated toward the BIFF, said Juanday, attracted by the promise of independence by Kato and Bravo.

“The young are idolizing these people. They feel these are the people who could lead them to freedom. Their numbers are increasing,” he said.

Juanday lamented that the bias against the Moros by Filipinos in Luzon and the Visayas had persisted for centuries, implanted by Spanish and American colonizers, who had declared that “the only good Moro is a dead Moro.”

This thinking should be removed, he said, if peace is to come to Central Mindanao, at the heart of opposition to the colonizers and destination for Christian settlers from the north since the Manila government began a “land for the landless” program in 1939 under Commonwealth President Manuel L. Quezon that largely marginalized the Maguindanaons, Maranaos, Yakans and Lumads in their ancestral domains.

Cotabato City is the seat of the ARMM that Malacañang now describes as a “failed experiment” in self-rule.

The ARMM was a result of the earlier peace agreement in 1996 with the Moro National Liberation Front (MNLF), the MILF’s earlier incarnation, led by former political science professor in Manila Nur Misuari.

Tens of thousands of internally displaced people, or IDPs, under international humanitarian protocols, remain in squalid encampments in Zamboanga City. The presence of these IDPs in the Christian enclave, critics say, is an indictment of the government and a sign that it cares little for these Tausugs and Badjaos from Misuari’s Sulu and Tawi-Tawi strongholds.

“If the Moros are given a chance, because of their competitive advantage, especially in the economy, I think it can bring something good to Mindanao,” Juanday said.

After he left the BDA, Juanday said he continued to invite potential foreign investors, particularly those from Johore in Malaysia, to where the Filipino Muslims trace their roots.

To take advantage of the Asean integration, he has proposed the development of the deep water port of Polloc and the construction of a road network connecting it to the airport and to the major southern Mindanao cities of Zamboanga, General Santos and Davao. This would allow the region to take advantage of increased trade in the economic integration of Asean.

Juanday’s organization of businessmen has scheduled meetings with a dozen ambassadors to reassure them that there’s peace and quiet in the region. “The Japanese want to come, but they want to find out what is happening. I said don’t worry, just come,” he said.

Juanday recalled that just a decade ago, the preoccupation in the city on the grips of war fever was food, guns and bullets. The preferred investment was purchasing an Isuzu Elf, not building homes, so that when conflicts erupted, it was easy to put all treasured possessions in the van and speed away to safety.

The Mamasapano massacre has generated uncertainty and forced a slowdown in work on malls and hotels, but by and large the prescriptions for peace offered by the physicians of the BDA are still working remarkably well.